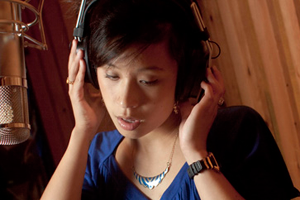 Maya Hatch was first exposed to music when her mother gave birth on August 18, 1985. Perhaps it was destiny that Maya Hatch would follow the footsteps of Stevie Wonder and sing for humanity’s happiness. Maya’s mixed heritage of Japanese parents and Caucasian-American father (English, Germans, Scottish) has made it clear that she believes music is the best medium for bringing people together. Maya started singing when she was eight years old. She joined the Sadako Peace Choir in Seattle, Washington, which is a multi-cultural children’s choir. Maya moved with her family to Tokyo, Japan four years after she graduated from elementary school. Maya performed in studio recordings at Japan’s top education television station (NHK), and she also acted and sang lead roles in two musical productions (“Anne of Green Gables”) at a Tokyo theater company. She auditioned for a national talent competition (“Chansu no Dendo/ “The Palace of Chance” TBS) in order to become a Japanese pop star. She was one of the 4 finalist from a 14,000-strong pool and appeared on television once per week for six months. Although the show ended abruptly and no winner was chosen, Maya felt that the experience confirmed her desire to be a professional singer. After returning to the States, Maya was introduced jazz. Maya, a sophomore at Roosevelt High School, was accepted into the prestigious Roosevelt High School vocal jazz ensemble. They performed and traveled across the country to compete for soloist and ensemble awards. In 2004, Maya was awarded the Elliot Bay Jazz Festival’s “Outstanding Musician Award” in Seattle, and the Reno International Jazz Festival’s “Outstanding Musicianship” award in Reno in 2003 and 2004. She also won Second Place in the Alto Vocal Soloist Competition at the Lionel Hampton Jazz Festival in Idaho in 2004. Maya received a generous scholarship from The New School, New York City in 2004 to pursue a 5-year dual-degree program at The New School for Jazz and Contemporary Music and Eugene Lang College. Chico Hamilton, Junior Mance and Jane Ira Bloom were her jazz mentors.