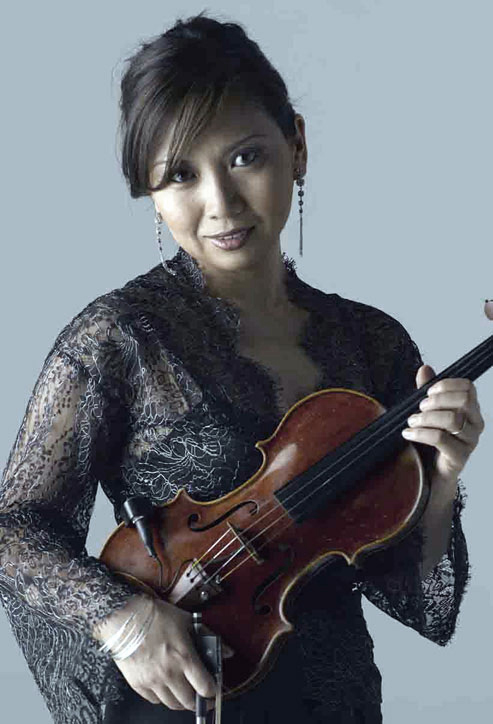 Meg Okura, a Tokyo native, made her solo U.S. debut as a concert violinist at the Kennedy Center with Alexander Schneider’s New York String Orchestra. She moved to New York City with two suitcases and her violin. There she received her bachelor’s degree and master’s degrees in violin performances from The Julliard School. Okura began her career as a jazz violinist at the Henry Mancini Institute, Los Angeles. She was the soloist and concertmaster of the orchestra that supported Herbie Hancock and Shirley Horn. This was under the guidance of music legends like Quincy Jones and Jerry Goldsmith. Okura was nominated for the Grammy as the violinist on Second Half of Emilio Solla y la Inestable De Brooklyn’s album. Okura has appeared on numerous recordings with many artists, including David Bowie and Lee Konitz, Sam Newsome, Jesse Harris and Ziggy Marley. She has performed at many venues around the globe, including at Carnegie Hall, Madison Square Garden and Village Vanguard, Blue Note Tokyo and other concert halls, as well as at festivals and concert halls worldwide, such as the Hollywood Bowl, Blue Note Tokyo and The Barbican. Okura spent a week at the Stone in New York City performing and presenting 12 concerts together with her ten groups. Okura has received numerous awards and grants, including the latest (TBA), New Music USA Project Grant (Meet The Composer), Metlife Creative Connections Grants (Meet The Composer), Brand Personality Award(Asia Pacific Brands Foundation), Jerome Composers Commissioning Programs (American Composers Forum). Okura has been featured as an arranger and composer on a number of television and film programs, including Louie (TV series) and The Congregation (documentary). She has composed music for the New York Symphonic Ensemble and Sirius String Quartet as well as C. Eule Dance. She is a violinist, erhu player and has been featured in many movies soundtracks including The Wildest Dream. She has appeared in three Cirque du Soleil productions, Wintuk and Corteo, and she has performed alongside Terrence Howard, an Oscar nominee actor. Okura was also a member of “Pharaoh’s Daughter”, a Jewish/Middle Eastern group, for the past ten year. It is led by Basya Schechter, an ex-orthodox singer-songwriter. From www.megokura.com