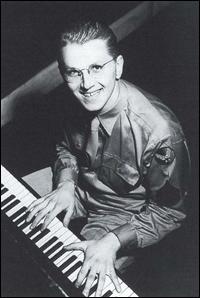 Born in New York City on February 12, 1923. Died in Los Angeles on April 24, 1998. California Mel Powell was a pianist and arranger who gained a reputation for his jazz playing. However, he spent most of his time teaching classical composition and writing serial form pieces. Born Melvin Epstein to Russian Jewish parents, Powell grew up in Bronx in a house that overlooked Yankee Stadium. This was where he discovered his love for baseball. However, he had a strong interest in music and was gifted with a talent for the piano. After sustaining a hand injury playing baseball, he had to make a choice and choose music. In his twenties, his older brother introduced him jazz and took him to his first concert featuring the Benny Goodman Band at Broadway’s Paramount Theatre in 1936. In 1987, he told The New Yorker that he had never heard jazz music as joyful as it was. This began a gradual drift to jazz that led him through many local bands and eventually out of college. He gained a reputation in his community and worked with Bobby Hackett and Zutty Singleton. In the 1930s and 1940s he also wrote arrangements for Earl Hines who was one of his most important heroes at the piano. Shortly after joining the Benny Goodman Band, Mel Powell changed his name and spent two years arranging and playing clarinet. The Earl, his composition dedicated to Hines that he recorded in 1941 without the assistance of a drummer, is his most well-known piece. After a brief stint in the CBS Orchestra, under Raymond Scott’s direction, Powell was inducted in 1942 and made a part of Glenn Miller’s Army Air Force Band. Because of Miller’s nervousness about flying, Powell’s career might have ended prematurely. The pianist was supposed to accompany the leader on the ill-fated last flight. But Miller suggested that the small plane could be safer and only him and the pilot would fly, leaving the rest to catch another flight. He recorded with Django Reinhardt, Jazz Club American Hot Band. After his discharge, he returned to New York with Goodman. In 1946, he moved to Los Angeles, where he played jazz briefly, tried his hand at film music briefly, and eventually married Martha Scott. He decided to make a major change in his life and enrolled at Yale University as a student of Paul Hindemith, the composer and teacher. Hindemith’s strict teachings led him to a completely different path, exploring what he called nontonal and not atonal composition methods. He told Whitney Balliett in 1987 what he thought was behind his decision. “I have decided to think through my decision not to continue jazz when I retire, with the assistance of Freud or Jung. It was, at the moment, this: I did what I felt I needed to do in jazz. It was not what I was most interested in musically. It was young men’s music. I was also fed up with the repetitive material that Goodman played night after night, day after day. This repetition had a tendency to destroy spontaneity, which is at the heart of jazz. It can provide a lifetime’s worth of nourishment. Powell’s decision wasn’t final. Powell recorded and played again in the mid-50s with Goodman as well as as a leader. Thirty years later, he made an unexpected return to jazz when he accepted an invitation to perform on the cruise ship Norway in 1986. He was joined by Dizzy Gillespie and Dick Hyman, among other jazz legends. His primary creative energy was directed to teaching, first at Yale, then at the California Institute for the Arts in Los Angeles. He also went into classical composition. This school of American serialism includes Copland’s later work and the music of composers such as Elliott Carter and Milton Babbitt. His exuberant, sophisticated development in traditional jazz was contrasting with his dry, nontonal compositions, and his experiments using electronic music. This contrast served to show his multifaceted, almost quixotic musical personality. From www.jazzhouse.org