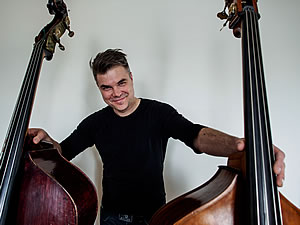 Michael Bates, a New York-based bassist, is an inspiring example of a musician in this new millennium. He is a near-virtuoso double basses player, visionary composer and bandleader who excels in all musical genres. His music is a blend of jazz, classical, world, and rock. He has a keen eye for the future and uses them to create a visceral, lyrical and cinematic sound. He has been performing cutting-edge music for over 20 years. “Simply put, Bates can make a huge difference on the current state of jazz,”-Glenn Astarita. He is known as a “charismatic player” who can navigate the most difficult and often overlooked road to experimentation. (Chris Watson, “The View”. His nine recordings, “Outside Sources”, (2006), “A Fine Balance” (2006) and “Live in New York (2008)” and Acrobat (2011), and “One From None”, (2012), Automatic Vaudeville (2013), Boom Crane (2014) and Northern Spy (2015) were recorded by Greenleaf Music and Sunnyside Records. His recordings have been widely acclaimed and published in publications like Jazz Times, Jazzman and Double Bassist, Signal to Noise and Jazz Podium. Northern Spy (Stereoscopic), his latest recording was made in the company of Curtis Mayfield and Blind Willie Johnson. Northern Spy was recorded in a single day after a European tour. It is a joyful snapshot of Bates’ current trio: Michael Blake on saxophone, and Jeremy “Bean” Clemons as drummer. There were no edits. Only the first and second takes. This is the real essence of the live, raw element of the trio. Bates adds, “I have dreamed of this for a while.” “Blake and Bean embody creativity and each time we play it’s a different experience. We have a lot of fun, the grooves get deeper, the band vibe is stronger and we have a great time. Although the music is different from what I have done before, I believe my compositional approach remains the same. This time, the sparse instrumentation allows us go to move freely into and out of the formats.” Northern Spy’s opening track is “Theme for a Blind Man,” a haunting, droning hymn that pays tribute to Blind Willie Johnson. Blake and Clemons get their own showpieces on “Roxy,” the swinger, and the drum feature “Bean.” “Essex House,” a 12/8 romp inspired by Donny Hathaway and “The End of History,” a meditation on blues that turns into a powerful moment of catharsis, is Blake and Clemons’s. The Northern Spy trio creates the centerpiece, “An Otis Theme On Curtis Changes”, by imagining a Curtis Mayfield-inspired melody Otis Redding might sing. Michael Bates began his career in Vancouver’s hardcore punk band, before moving on to jazz and modern classical music. Bates moved to New York City in 2002. He has collaborated with JD Allen and Tom Rainey, Chris Speed and Jeff Davis. As a sideman, he has appeared on more than 70 recordings and toured the United States, Canada, and Asia. Michael co-hosts the award-winning podcast “A noise from the deep” with trumpeter Dave Douglas. He has also taught at the Banff Centre of the Arts and the AMR in Geneva, Switzerland, as well as several universities around the world. from http://outsidesources.org