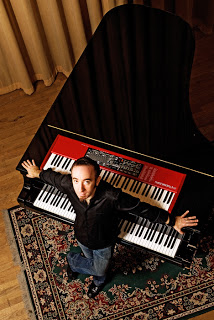 Gallant was the son of a musical family. He began piano lessons at five years old. Maria Rodriguez, a fiery teacher from the Levine School of Music, taught Gallant how to improvise eight years later. Gallant says, “She taught me how to play the blues and how to improvise long melodic line, and how you can say a lot using just one note or rest.” Gallant composed “The Real Maria” to honor Rodriguez’s death from cancer. A version of the song can be found on Completely. Gallant says that he didn’t want to pay tribute to Rodriguez by writing something sorrowful. He wanted the song to reflect her grace, energy and swagger, all qualities that inspired him. Gallant had already played music at the Kennedy Center, the White House, and New Orleans with a Dixieland Jazz band, performing at Preservation Hall. Gallant began a long relationship with the Studio Theatre in the District, recording music for the first of five collaboration productions. Columbia University taught Gallant composition, anthropology and computer music. After completing his BA in 2003, Gallant sent a blind email offering to become a New York correspondent to Keyboard magazine. Gallant says, “The editor must have noticed something in me because I was on a plane from New York to write a story about Page McConnell of Phish within a month.” Gallant says that Page was my keyboard hero for many years so it was a complete pleasure to be thrown in the deep end. Gallant joined the staff of the magazine in 2005 as a full-time editors. He wrote cover stories about major artists such as Chick Corea, Tori Amos and Billy Joel. Gallant also continued his music career, playing in clubs and recording sessions. He produced a critically-acclaimed album with the indie band The Simple Things. Gallant Music was founded in 2009, and he started creating articles about culture and advocacy for the National Endowment for the Arts. Completely was also produced by his wife Rachel Rossos. He recorded an album with Aurical, an indie band. Aurical’s debut album was released in 2011 to great reviews. Gallant has recently composed music for Aurical’s interactive iPad graphic novel and scored video for Anti-Defamation League. Gallant is currently composing music for Remedy, his first feature film. Completely will also be featured in the film. Recent journalism credits include DownBeat covers stories on Esperanza spalding and Diana Krall, and columns in Keyboard and M: Music and Musicians magazines. from http://bucklesweetmedia.com