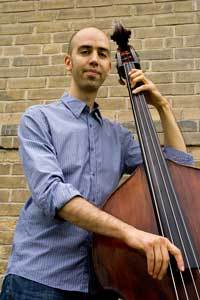 Michael Herring, a double-bassist, composer, and performer based in Toronto, is equally at home in both jazz and roots settings. Herring is the leader and co-leader of a variety of music groups that focus on original music. Herring also co-leads Peripheral Vision with Don Scott, his long-time collaborator and guitarist. This modern-jazz quartet brings out the harmony between their musical personalities and their complementary writing styles. Peripheral Vision continues to tour with its third album, Sheer Tyranny, by Will Michael Herring Quartet. This is a two-saxophone group that draws inspiration from 1960’s jazz and especially Ellington. Vertigo, Michael Herring’s original jazz sextet, is composed of some of the most prominent voices in Canadian Jazz. New York’s David Binney, on alto saxophones, also recorded Dark Materials. It was praised for its new album, Sheer Tyranny of Will Michael Herring Quartet. Herring’s compositions, as well as his bass playing, can be heard in the collectives Way North, a New York/Toronto collaboration featuring Petr Cancua and Rebecca Hennessy), and God’s Gift To Yoda (experimental jazz-rock), which released their debut album This Album is Not For People. Herring can also be heard singing and backing vocals in Harrington and The Uplifters (Roots Nerd Rock and New Orleans Pop), where you can listen to Herring’s lyrics and vocals lead and sing along with his voice and can be heard. Herring has recorded many tours in North America, Europe and Korea with his ensembles. He also shared the stage with great musicians such as Bucky Pizzarelli (ICP/Amsterdam), Ken Vandermark (Ken Vandermark), Jah Youssouf, Mansa Sisoko (Mali Africa), David Braid (Roots Nerd-Rock), Dave Clark, P.J. Perry, Tannis slimmon, Harry Manx and Lina Allemano were all recorded with his ensembles. Herring’s arrangements and compositions have been included in many ensembles’ repertoires. He also wrote the soundtrack for the short film In Harms’s Way. Herring was born in Victoria, B.C. and moved to Toronto where he studied with Don Thompson and David Young at the University of Toronto’s Jazz Performance Program. He was invited twice to the Banff International Jazz Workshop (2000 and 2003), and he also lived in New York (2004). He studied with Drew Gress and Ben Street, Dave Douglas and Kenny Werner. For a prolonged stay in New York City, he was awarded a Chalmers Arts Fellowship through the Ontario Arts Council. http://dangerherring.com