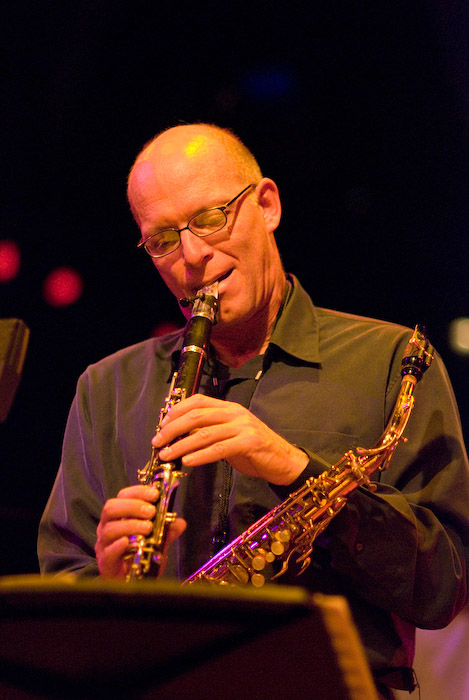 Michael Moore was born in Arcata, California. He was raised there in 1954. After learning music at home and playing in local bands, Moore moved to Boston to continue his studies at the New England Conservatory of Music. He graduated in 1977. After spending a year in New York City, he traveled to Europe in 1978 to join Available Jelly, the musical accompaniment of the Great Salt Lake Mime Troupe. He has lived in Amsterdam, Netherlands since 1982.
In the early ’80s, he worked in theater (Baal and Dogtroep), De Voorziening and Teo Joling) and dance (Pauline De Groot and Katie Duck) among other musical contexts like Guus Janssen’s Septet, Franky Doug’s Sunchild, Guus Hendricks Octet, Maarten Altena’s Quartet and Octet. He recorded and played with Gerry Hemingway and Sean Bergin, Maurice Horsthuis and Klaus Konig.

He was awarded the Dutch jazz award Boy Edgar Prijs in 1986. Trio Clusone won the Boy Edgar Prijs Dutch jazz award in 1986. In 1997, they were voted #1 acoustic band (Talent Deserving Greater Recognition) by Down Beat’s Critics Poll. Moore was also voted #1 clarinetist in that same poll in 2000-2002. In 2000, he was also awarded the Bird Award at the Northsea Jazz Fest.

His activities as a composer and performer since 1991 have been documented on Ramboy and other labels such as hatART and Gramavision. You can hear his playing and writing on over 80 CDs.

Michael Moore is an American jazz musician with a deep appreciation for Dutch improvised music traditions. However, his writing and playing are also heavily influenced by music from other countries. Oguz Buyukberberber and Husnu Sendirici have played Turkish music, as well as Malinese music with Toumani Diabate Keletigui Diabate & Habib Koite. He also plays Portuguese music with Cristina Branco and Fernando Lameirinhas. Musics from Istria, Madagascar, Istria, and Indonesia are also highly influential. He has had the pleasure of working with poets, poetry, dancers, and other visual artists. Michael continues to compose, improvise and play new Ramboy and other label releases.