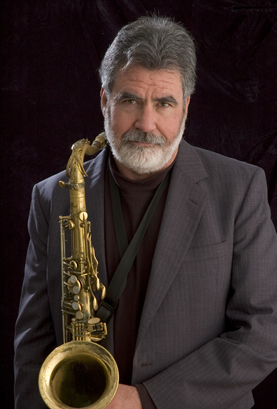 Michael O’Neill is a staple of the San Francisco Bay Area jazz scene. He began learning clarinet when he was 10. John Guerin, a jazz and studio drummer who was also his neighbor, was one of Michael’s first influences. Guerin helped Michael form his first jazz band at Junior High School. He was a member of school bands and orchestras while growing up in San Diego. After serving in the Air Force Band, his college education was a biology major with music minor. He studied composition, arranging, and jazz performance while also playing in jazz clubs in the evenings.
O’Neill received his bachelor’s degree and began a career as a biologist. He then went on to graduate school at Texas A&M University to complete a Ph.D. Music was always his passion and he played gigs all over town when he wasn’t studying. After two years in graduate school, he decided to follow his true passion and devote himself fully to music. While playing in salsa and dance bands, he also began studying with Joe Henderson.

O’Neill quickly made a name for itself. O’Neill signed up for several high-profile, steady gigs, including a 13-year stint at the RitzCarlton in Half Moon Bay, 7-year stint at Cetrella, and a 6-year steady gig at The Sofitel on San Francisco’s peninsula. He has recorded and played with Idris Mohammed, Joe Locke and Geoffrey Keezer as well as Rodney Jones and Kenny Washington. He frequently performs at Yoshi’s as well as all the other major venues in the Bay Area.

O’Neill has been writing music for many years. He began writing music for industrial and corporate films in the mid 1980s. This led to a successful career as a music composer for television and documentaries. O’Neill was exposed to new musical ideas across genres, which enriched his musical vocabulary. O’Neill was required to compose for National Geographic and Discovery Channel. This led him to learn and digest a variety of folk and ethnic music, as well as the works and masters of symphonic music. O’Neill learned to compose music every day even though he was not working on a commercial project.

Michael is now the leader of several jazz groups in San Francisco. He enjoys working with outstanding vocalists. His first album, Pacific Standard Time, featured Tony Lindsay, a singer who was famous for his work with Santana between 1995 and 2015. O’Neill’s three first albums featured Kenny Washington, a world-renowned Bay Area singer. The couple has been together for over 20 years and they have performed together at many important venues, including the Monterey Jazz Festivals, San Jose Mid- Atlantic, and San Jose Jazz Festivals.

Michael’s fifth album, And Then It Rained (Jazzmo Records), is a departure from previous albums. The Long and Short of It (2004) and Still Dancin’ (2006), New Beginnings (2014) and Pacific Standard Time (2019), all featured Kenny Washington and Tony Lindsay singing well-known jazz standards. O’Neill also composed the instrumental collection And Then It Rained.