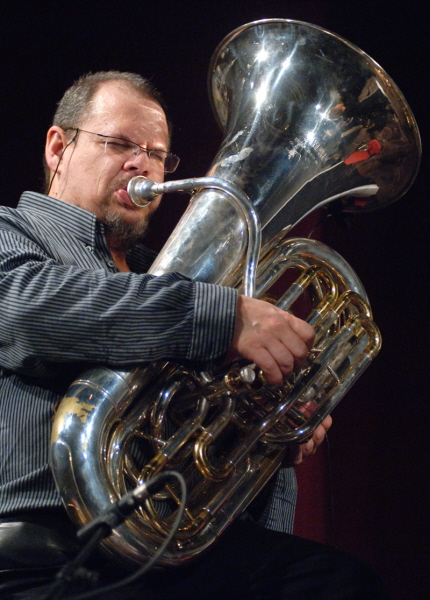 Michel Godard was born near Belfort, France, in 1960. He quickly established himself as a highly versatile tuba player, and he continues to be a leader in Jazz and improvised music. Michel Godard’s tuba performance has it all: His technical skills are amazing, his tone is clear and warm, and his ability to produce overtones (“multiphonics”) is unmatched. Also, his musicality is a surprise at how light and compact a tuba that seems heavy and cumbersome can sound. He also picked up the serpent, the ancestor tuba. It was named after its shape, which looks like a coiled snake. Its distinctive warm and powerful tone is due to its ivory mouthpiece. Michel Godard is taking another step to expand the range of expression in Jazz and ancient music with this “second” instrument. Michel Godard has been the serpent teacher at Paris’ “Conservatoire national de musique” since 2002. Michel Godard has been a classical musician since 1988, when he was a member of the Radio-France Philharmonic Orchestra. He also played with the French National Orchestra and the Ensemble Musique Vivante. He was also part of the “Arban Chamber Brass”, a quintet that toured Japan, America, and Africa. He also interprets solo works. It is no surprise that he has been discovered both by European jazz and the avant-garde, thanks to his vast experience. He was also a member, from 1989 to 1991, of the French Orchestre National de Jazz. Michel Portal, Enrico Rava and Henry Texier have been part of numerous creative projects in Western and Souther Europe since then. As a composer, Michel Godard was comissioned by Radio France (“Penthes(il)ee II”), Donaueschinger Musiktage/Sudwestrundfunk (“de memoire de tuba”, “Tra la folla, mora, mormora” , “Praeludium”), French Ministere de la Culture (“Bradamente aux aguets”, “les enfants d’un paradis”). He has recorded many cds with his own projects, including “Archangelica”, ImpertinAnce”, and “Cousins Germains”, for CAMjazz. “Trio rouge” for Intuition. Michel Godard also recorded and played with the Quimper pipe band, which includes reggae star Alpha Blondy, and “Canterbury” rockers John Greaves, and Pip Pyle. Together with harpsichordist Freddy Echelberger, he collaborates with writer Nancy Huston (Tendres tenebres, peregrinations Goldberg, Tentatives de renaissance) from http://www.michel-godard.fr