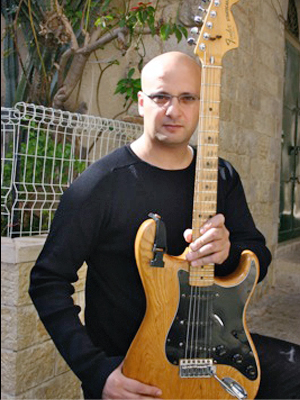 Michel Sajrawy, guitarist and composer, was born to a Palestinian family in Nazareth – Israel. He began taking guitar lessons at the age of nine. He received an electronic engineering diploma between 1990 and 1993. He moved to London in 1995, and completed a one year diploma at the Musicians Institute – G.I.T. In 1996, he began a three year degree program at The London College of Music. He also completed a one-year diploma at the Musicians’ Institute – G.I.T. He returned to Nazareth in 2000 and started his own business, Dasam Studio. Dasam is an Arabic word for rich food . He was a band leader and released Yathrib (Ozella Music, 2006), which marked his entry into the forefront of crossover artists who are committed to creating a jazz sound that is both traditional and modern. His second album, Writings On The Wall (Ozella Music), was released in 2009. This marked a shift towards west-eastern acoustic fligree jazz. The album was one of the top jazz albums in 2009, and it was voted “Best Albums of 2009” by Freies Radio Stuttgart. Michel is a great jazz guitarist. He toured the country with his band and also played at the Leipzig Jazz Festival (2006). He also played in Switzerland-Geneva (2007) and the Jerusalem Festival (2007). This was where he met Nigel Kennedy and they jammed together. He also played in New York (USA) (2008). He played in the Jordan Festival (2009), and Tel Aviv Jazz Festival (2009-09). He was a collaborator with Abboud Abdel’All, Bashir Abdel’All, Ahmed Mukhtar and Samir Jubran. He composed the music for many documentary films, orchestrated the music for various mini orchestral projects, and produced radio jingles to promote the top brands in the country. Michel has been awarded the Wilfred Joseph Prize (1998-99 England), Best Title in Music (2002 Israel) and the A. M. Qattan Foundation’s Performing Arts Grant for the year bio by www.michelsajrawy.com