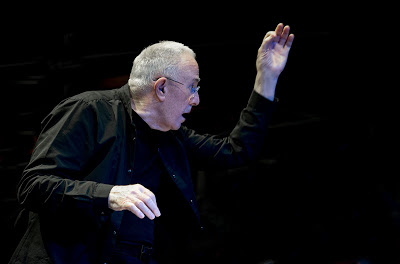 Mike Gibbs is an arranger, composer and trombonist. He is a graduate of Boston’s Berklee College of Music and has collaborated with many of the top musicians in the world, including John McLaughlin (John Scofield), John Scofield, John Scofield, John Scofield), Mike Stern, Joni Mitchell and Peter Gabriel. Mike Gibbs was born in Salisbury (Southern Rhodesia), on September 25, 1937. He grew up playing the trombone and piano. He moved to the USA in 1959 and enrolled at Berklee College of Music. He was awarded a full scholarship to Lenox School of Jazz in 1960, where he studied alongside George Russell, Gunther Schuller and J.J.Johnson. In 1963, he graduated from Boston Conservatory of Music (B.Mus), and later secured a full scholarship to Tanglewood Summer School, where he studied alongside Aaron Copland and Iannis Xenakis. He had already recorded his debut (1962) as an arranger and composer with Gary Burton, Tommy Flanagan, and Joe Morello. Mike left the USA in 1964 to move to the UK, where he played trombone for Tubby Hayes and Graham Collier. He was also a studio musician, arranging music for television, film, radio and other media. He played in his own bands from 1968 to 1974, and also performed with radio stations in the UK, Europe, and Denmark. He won many Melody Maker Awards in the 1970’s, including Best Big Band, Musician, Year, and First Arranger. His own album, In the Public Interest, was also voted the Best Album of 1974. In the 1960’s Mike Gibbs was a well-known jazz composer/arranger. He already had a lot of his major influences (Gil Evans and Charles Ives) and was able to create his own style and sound. His buoyant rock rhythms, and his use of assymetry, were a precursor to the jazz-rock movement in the 1970’s. He also contributed compositions such as Family Joy and Oh Boy! Tanglewood 63 demonstrated extraordinary melodic talents as well as exceptional orchestral sonority. His writing for the lower instruments was particularly dramatic. His work already had considerable emotional resonance. It ranged from the dark brooding of And on the Third Day to Family Joy,Oh Boy, which is one of the most joyful compositions in jazz, or any other music. Sweet Rain, which he composed, has been recorded numerous times by Stan Getz, Stephane Grappelli and Gary Burton. It is now a jazz standard. In 1974, Mike returned to the USA to take up the post of Composer-In-Residence at Berklee College of Music, but continued to do occasional tours and concerts with his own bands as well as performances with European Radio Bands and Orchestras. He also briefly worked as an Elektra/Asylum producer in the 1980’s. Mike left Berklee in 1983 to become a freelancer in New York. He returned to London in 1985. He began recording again with his own groups in 1988, which resulted in the highly-praised Big Music album for Virgin/Venture. In 1995, he returned to live performance with Gary Burton and NDR Big Band, and in 1991, with John Scofield, for a UK tour. Mike Gibbs has worked as an arranger and composer of music for television, films, albums, dance, jazz groups, symphony orchestras, and radio. He is equally proficient in classical, modern, and traditional jazz styles. Recent projects include a composition to Bill Frisell’s Birmingham Contemporary Music Group (Bloods of Dust); music for London Brass (About Face); music for Bill Forsyth’s film (“Gregory’s Two Girls”); arrangements and conductions for an Ellington concert in Weimar with Gary Burton, NDR Big Band, and Radio Symphony Orchestra; and a part-time professorship at the Sibelius Academy Jazz Dept in Jazz Composition. Helsinki. Mike recorded Nonsequence, his debut album for Provocateur Records in 2001. He traveled to Hamburg and New York to finish the sessions. from www.gaibryantspareparts.com