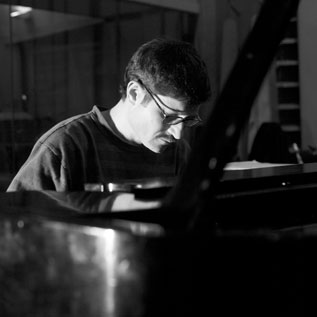 Pianist, composer/arranger, and educator Mike Holober served as Artistic Director/Conductor of the Westchester Jazz Orchestra (WJO) from 2007-2013 and since 2011 he has been Associate Guest Conductor of the HR Big Band (Hessischer Rundfunk, Frankfurt, Germany). With WJO he has written and conducted for Joe Lovano, Kate McGarry, John Scofield, John Patitucci, Randy Brecker, and Paquito D’Rivera. Recent projects with the HR Big Band include writing and conducting for Kurt Rosenwinkel, Billy Cobham, Jane Monheit, Terje Rypdal, Dr. Lonnie Smith, and Miguel Zenon. Upcoming projects with HR include a concert of the works of Frank Zappa for the 2015 Frankfurt Jazz festival. In January of 2014 he wrote and conducted a project for the WDR Big Band in Cologne, featuring Avishai Cohen and Eli Degibri. Upcoming with WDR is a project for drummer Al Foster. He has also recently written for Joshua Redman with the WDR Big Band and a work for the new Stockholm Jazz Orchestra recording. Other major commissions include the concert-length work In The Wind commissioned for The Gotham Jazz Orchestra by The Philadelphia Museum of Art (funded by the Pew Foundation), and Flow; In Celebration of the Hudson River commissioned by WJO and funded by a NYSCA Individual Artist’s Grant. Mike has performed with/had his works performed and recorded by The Vanguard Jazz Orchestra, The Scottish National Jazz Orchestra, Zagreb JazzOrkestar, The Gotham Wind Symphony (where he is Composer-In-Residence), UMO, The Airmen of Note, The Army Blues, his own big band The Gotham Jazz Orchestra, The Tim Ries Rolling Stones Project, John Patitucci, Jason Rigby, Marvin Stamm, The Prism, American, and NY Saxophone Quartets, and many others. As a sideman he has performed on over sixty recordings, and he has released four recordings as leader. His most recent project, Balancing Act, for 7 players with voice, features Kate McGarry, Dick Oatts, Jason Rigby, Marvin Stamm, Mark Patterson, John Hebert, and Brian Blade. Balancing Act’s debut recording will be released November 13th on Palmetto Records. Also recently completed is the project In The Wind for piano trio with 7 winds, guitar, harmonica, and voice. An Associate Professor at The City College of NY, Mike is a MacDowell Fellow, Ucross Foundation Fellow and Yaddo Guest. Additionally he currently teaches composing and arranging at The Manhattan School of Music, and lessons for The Thelonious Monk Institute. From 2007 – 2015 he served as Associate Director of the BMI Jazz Composer’s Workshop, (founded by the legendary jazz composers Bob Brookmeyer and Manny Albam), where he taught with Musical Director Jim McNeely. from http://mikeholober.com