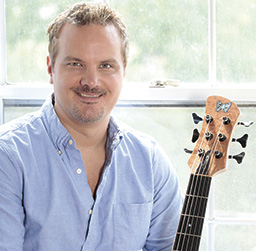 With his third album, Cold Truth, Warm Heart, Mike Pope, bassist and composer, creates significant musical, spiritual, and personal bridges between the present, past, and future. He is a visionary arranger, composer and bandleader as he presents the new album. This 2014 album is his first in a decade. It establishes a new level of leadership for the virtuoso acoustic/electric bassist, who has toured extensively alongside Chick Corea and David Sanborn, Al DiMeola, Bill Bruford and, more recently, Joe Locke, and Eldar Djangirov. Pope’s 2002 album The Lay of the Land featured contemporary jazz and stellar musicians like Randy Brecker (John Patitucci), Jeff “Tain”, Watts, and others. Although it was well received, he spent most of his time touring with other groups. He moved to Maryland in the midst of a divorce and started a family. His life was more stable. Both his professional and personal lives were successful. He is blessed with two beautiful children and lots of new music. Pope says that the new album was written specifically for the musicians who were listening to it. It was important to create music that felt inspired. I was less concerned about how it would go together than how it felt at the time. Pope also directs most conversations. The (recording and touring] musicians provide excellent interaction and improvisation. Pope allows these world-class improvisers plenty of room to be themselves. Eldar Djangirov (piano), Joe Locke, Seamus Blake (tenor saxophone), and Mauricio Zttarelli (drums) make up the stellar touring band. The latest album features all except Djangirov. Mike Pope brings a unerring gravitas to each role he plays. His ability to play the bass is unmatched by any other player on the planet. His latest work embodies the essence jazz: rich melodies and lush chords. He is surrounded by gifted improvisers of equal talent and stature who are open to the possibility of creating truly inspiring music. from http://www.mikepopejazz.com