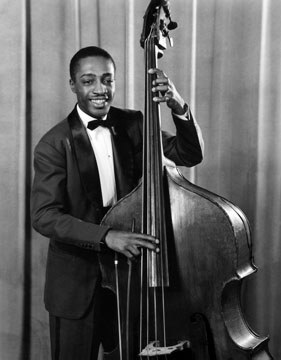 Milt “The Judge” Hinton was regarded as the Dean of jazz bass players. He was born in Vicksburg, Mississippi in 1910, and at the age of eleven moved to Chicago with his family. He began his musical education by taking private violin lessons, but while attending Chicago’s Wendell Phillips High School and playing in a band sponsored by the Chicago Defender newspaper, he learned to play bass horn, tuba, cello, and eventually the bass violin. Like many aspiring Southside musicians of his generation, he was influenced by the legendary educator, Major N. Clark Smith. During the late 1920s and early 30s, Milt worked as a freelance musician in Chicago and performed with legendary jazz artists including Freddie Keppard, Zutty Singleton, Jabbo Smith, Erskine Tate, and Art Tatum. His first steady job was with a band led by Tiny Parham, followed by a stint with violinist Eddie South’s Orchestra. Milt’s earliest recording come from this era. In l936, Milt joined Cab Calloway and for fifteen years performed with Calloway and renowned sidemen such as Danny Barker, Chu Berry, Doc Cheatham, Cozy Cole, Dizzy Gillespie, Quentin Jackson, Illinois Jacquet, Jonah Jones, Ike Quebec, and Ben Webster. During this period he was also featured on numerous recordings accompanying Benny Carter, Benny Goodman, Lionel Hampton, Coleman Hawkins, Billie Holiday, Ethel Waters, and Teddy Wilson – to name just a few. Most of these sessions have become jazz classics. After leaving Calloway in the early 50s, Milt began working as a studio freelancer in New York City. For two decades he played on thousands of jazz and popular records. He also played on hundreds of jingles and film soundtracks and numerous radio and television programs. In addition, he made concert and festival appearances around the world and toured extensively with Louis Armstrong, Pearl Bailey, and Bing Crosby. Milt has played with virtually every jazz and popular artist from Ellington, Coltrane and the Marsalis Brothers to Streisand, Midler and McCartney. In the late 80s Chiaroscuro Records released Old Man Time , a double cd featuring Milt along with many life-long friends from the music world. Laughin’ at Life, was released by Columbia Records in 1995 and Chiaroscuro recently released The Judge at His Best, a selection of his recordings on that label over three decades, and the Bassment Tapes, which features Milt performing with groups he assembled. Milt received honorary doctorates from William Paterson College, Skidmore College, Hamilton College, DePaul University, Trinity College, the Berklee College of Music, Fairfield University, and Baruch College of the City University of New York. He won the Eubie Award from the New York Chapter of the National Academy of Recording Arts and Sciences, the Living Treasure Award from the Smithsonian Institution, and he was the first recipient of the Three Keys Award in Bern, Switzerland. In 1993, Milt was awarded the highly prestigious American Jazz Master Fellowship from the National Endowment for the Arts, in 1996 he received a New York State Governor’s Arts Award, in March 1998 he was awarded the Artist Achievement Award by the Governor of Mississippi, and in 2000 his name was installed on ASCAP’s Wall of Fame. Milt began taking photographs of his friends in the l930s, and he has continued ever since. Over the years his collection has grown to more than 60,000 images. The work depicts an extensive range of jazz artists and popular performers in varied settings – on the road, in recording studios, at parties, and at home – over a period of six decades. In June 1981, he had his first one-person photographic exhibition in Philadelphia and since then he has had exhibits across the country and in Europe. In addition to being published in major periodicals, Milt’s photographs have appeared in documentary films including The Long Night of Lady Day (Billie Holiday), The Brute and the Beautiful (Ben Webster), and Listen Up (Quincy Jones). A Great Day in Harlem a 1994 documentary about Esquire’s photographic shoot of jazz legends in 1958, features numerous photographs by Milt as well as a home movie shot by his wife, Mona Hinton. In 1988, Bass Line: The Stories and Photographs of Milt Hinton, by Milt Hinton and David G. Berger was published by Temple University Press. It was selected Book of the Year by JazzTimes. In 1991, OverTime: The Jazz Photographs of Milt Hinton, was published by Pomegranate ArtBooks. In 1990, Milt’s 80th year, WRTI-FM in Philadelphia produced a series of twenty eight short programs in which Milt chronicled his life. These were aired nationwide by more than one hundred fifty public radio stations and received a Gabriel Award as Best National Short Feature in 1990. In June 2000, a concert was held to pay tribute to Milt on the occasion of his 90th Birthday. Milt passed away six months later. In late 2002, Keeping Time: The Life, Music & Photographs of Milt Hinton, a one hour documentary film was completed. It was produced and directed by David G. Berger and Holly Maxson. It debuted at the London Film Festival, won the Audience Award at the Tribeca Film Festival in 2003, and has been shown at film festival both here and abroad. Milt and Mona Hinton were married for fifty-seven years and have a daughter Charlotte and granddaughter Inez who live in Atlanta. The Hintons’ life-long involvement in their Queens, New York community, their strong commitment to family, and their ongoing contribution to music and photography made them both role models and an inspiration to younger generations. from http://milthinton.com