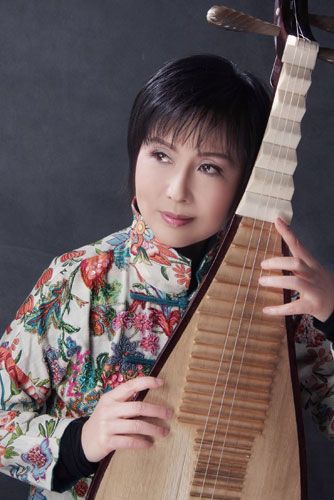 The pipa is a key instrument in Chinese music and has a rich, storied history that dates back almost two thousand years. Min XiaoFen, a renowned composer, singer and pipa soloist has done more to honor and reinvent this history than any other artist. Min Xiao-Fen was a classically trained Chinese musician before moving to America and establishing a new path for her instrument. She is also one of the most prominent figures in jazz, free improvisation and contemporary classical music. Ms. Min’s music combines east and west, tradition, innovation, discipline, spontaneity, an ancient past and an unexplored future. The Village Voice praised her for her ability to “take her ancient Chinese string instrument into future.” The New York Times praised her work as a “sweeping musical odyssey” and cited her expressive voice as a reason she has collaborated with such creative luminaries as Wadada Lee Smith, Randy Weston (John Zorn), Christian Marclay, DJ Spooky, DJ Spooky, Bjork, and Randy Weston. Min is still a sought-after interpreter of traditional Chinese music, performing and recording with many of the top symphony orchestras around the globe. However, she has been particularly inspired by the discovery of new settings for the ancient pipa. Min’s Blue Pipa Trio with guitarist Steve Salerno as well as bassist Dean Johnson offers a unique perspective on an obscure history that dates back to her. As a departure point, the trio draws inspiration from Buck Clayton, the legendary jazz trumpeter. They mix Kansas City swing music with the music and poetry of Li Jinhui, the “Father” of Chinese popular music. Min’s 2012 album Dim Sum was her first to be solely focused on her original compositions. It also highlighted the wide range and boldness of her musical vision. Min called it “musical dishes meant for the heart”, which was inspired by street sounds she heard growing up. Mao, Monk and Me, her latest album, is a deep personal exploration of Thelonious Monk’s music, paired in fascinating ways with Chinese folk songs and children’s song that she grew up in Nanjing, the ancient capital. The New York Times called the project a “cross-cultural tour de force” that “apostalized the future.” Min also premiered her original score to The Goddess, a 1934 Chinese silent film. This film was long lost and recently recovered and restored. Min’s unique score features Rez Abbasi, an acclaimed guitarist who combines influences from South Asian music, modern jazz and progressive rock. This major event came after a successful 2017, in which Min was artist-in-residence at the Sound of Dragon Society in Vancouver, along with releasing Mao and Monk, and was also a guiding artist for the Creative Music Studio in New York. She performed with Karl Berger’s CMS Improvisers Orchestra in fall. She was the principal soloist in Washington D.C.’s PostClassical Ensemble for Daniel Schnyder’s “Concerto for Pipa” world premiere.