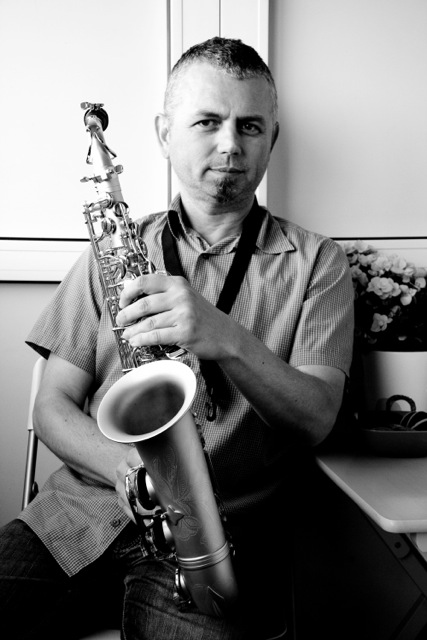 Miro Kadoic was a Zagreb native. In 1986, he graduated from the Zagreb Academy of Music. He was awarded and received prizes at several classical music competitions (i.e. First Federal Prize in Clarinet Category, 1980; etc. The scholarship for the Musical Youth for Young Jazz Talents was awarded in 1982. In the 1980s, he began playing in blues bands (Podroom Blues Band), and collaborating with pop-rock musicians Massimo Savic (Parni Valjak), Voodoobuddha etc. He also started playing in jazz groups. He traveled to New York several times, where he studied with Reggie Workman (Blues Brothers Band) and Blue Lou Marini. He was a soloist for many years and the first saxophone player in the Radio Zagreb Big Band. He also started leading jazz combos, including Kadoic-Krizic Ansamble and Miro Kadoic Quartet. He was a member the RTV Slovenia Big Band from 1993 to 2007. He was a soloist in the above mentioned orchestras and played with many notable musicians, including Clark Terry, Johnny Griffin, Erni Wilkins, N.H.O. Pedersen, Herb Pomeroy, Silvia Droste, Jerry Van Royen, Bosko Petrovic, Maria Schneider, David Murray, Bill Holman, etc). He is an active musician in both the Slovenian and Croatian music scene where he collaborates with prominent musicians such as Primoz Gracy, Matthias Daneck and Kruno Levacic. He was a substitute for the Duke Ellington Orchestra’s first alto in 2012. Miro Kadoic was awarded the Status Award by the Croatian Association of Musicians in 1997 for being the best Croatian alt-saxophonist. He was the leader of the quintet that played his compositions at the start of the 1990s. Some of them were inspired by Balkan folk music. Megaton Records published the CD Dry in 1995 as a result of this cooperation. Other CDs that he played on include “50 Years of RTV Slovenia Big Band”, (1994/1995), Peppino Principe – “Jazz Accordion” (1994), RTV Slovenia Big Band – “Zlatna sezdeseta” (1997), Ratko Divjak – “Caravan” (1998), Gabi Novak “Pjesma Je moj zivot” (2002) and Bosko Petrovic u0026 Friends” (2005), “Monster in the Garden” (2008), “Human Link” (2011), “Human Link (2015), “Without Return” (2005). Miro Kadoic is founder and leader the jazz quintet TEN Directions and MIROKADO Quartet. They perform original compositions and modern compositions by world-famous authors such as Joe Henderson and Wayne Shorter. The sound and arrangements are given special attention when classical and exotic scales, unorthodox instrumentalization and rhythmic patterns are combined with elements from modern jazz. He was awarded the 2008 prize for the best jazz composition with his arrangement and composition “Monster in the Garden”. In 2012 he won a Porin awards for best jazz album(Free Point) and best performance(Moonflowers). He is also a composer for film and video. From www.music.com.hr