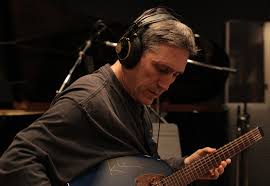 He was a distinguished teacher at Berklee, with specialties in harmony, ear training, and improvisation. In 1994, he was awarded the Dean of Faculty award for the “most valuable contribution to improving teaching.” This was in recognition of his tireless dedication to students, including his work with learning disabled students, and his pioneering work as the creator/producer/chair of Berklee’s Committee for Music Perception and Cognition Studies. Haupers was the managing partner of Mr. Goodchord Publications from 2001 to 2009. This collaborative publishing venture produced six books together with Mick Goodrick, a jazz guitarist. The partnership was formed originally to release the series, Mr. Goodchord’s Almanacs of Guitar Voice–Leading, to public markets. The rhythm-training book, Factorial Rhythm for All Instruments, which he co-authored with Goodrick, is currently in its second edition. He also created piano arrangements for Goodrick’s original compositions Thirty Six Solo Pieces For Fingerstyle Guitar. He also produced, taught and directed the Mr. Goodchord’s Summer Workshop, Northampton, MA in 2009. This workshop was designed to incorporate the book material into daily practice and teaching. As evidenced in the acknowledgments on recordings like Yellowjackets and Altered State, Haupers has been influential in presenting and teaching Goodchord materials to world-class composers and musicians. He has been working with Yellowjackets, the renowned recording artist, on projects that focus on music education. This includes The Music of the Yellowjackets at Berklee with its current focus of collaborative writing. Haupers co-authored several core curriculum eartraining books that are still being used at Berklee. Haupers is also the co-author of several professional articles. These include two features for Keyboard magazine about voice leading, and another featuring Russell Ferrante (Yellowjackets’ founder) on Bill Evans’ contributions to jazz piano. This article was written in honor of the 50th anniversary of Miles Davis’ landmark recording, Kind of Blue. Haupers wrote the liner notes to the latest CD by Peter Erskine’s New Trio, Joy Luck. Haupers also wrote the foreword of Erskine’s highly acclaimed No Beethoven: An autobiography and Chronicle of Weather Report. Haupers has completed a two-year program of study with Bozo Podunavac, a master luthier, in music instrument building in San Diego, CA. He also holds a Bachelor of Arts degree in Music Theory from DePaul University in Chicago, IL. He is currently a faculty member, assistant to the Chairman, as well as Manager of Third Stream Studies Department at New England Conservatory of Music in Boston, MA. Haupers has been involved in the music and recording industries for over 38 years. He has held various positions, including sales, public relations, art design, promotion, and sales. He has experience in producing jazz festivals, including performances with Stan Getz and Kenny Barron as well as Ran Blake, Mick Goodricks, Dave Holland, Mick Goodricks, Dave Moses, Lewis Nash and Gunther Schuller. His professional experience includes classical orchestral management, touring, and concert management for MacArthur Award winners and other world-famous jazz musicians. His most recent project is an album of original compositions called Invisible Cities. It was inspired by the writings and ideas of Italo Calvino. Jimmy Haslip, Yellowjackets’ founder and bassist, produced the CD. It was funded partly by a Kickstarter pledge drive. The CD features performances by members from the Boston Pops as well as world-class jazz musicians like Darek Ole and Peter Erskine. from http://www.mitchhaupers.com