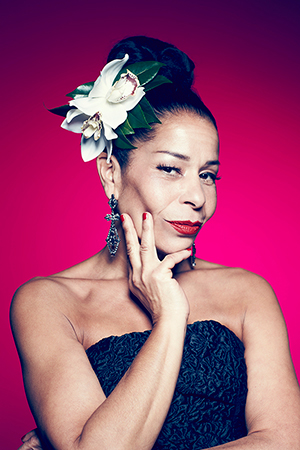 Molly Johnson, a Grammy-winning jazz singer and songwriter from Canada, is well-known as a mother, singer, philanthropist, artist, and songwriter. She has become an icon of the Canadian jazz scene. Molly Johnson’s beautiful interpretations of blues and jazz standards are a testament to her emotional depth. Molly’s story begins in the mid-sixties, when she and Clark Johnson, a young grade schooler were chosen by Ed Mirvish, a legendary Toronto producer and icon, to perform in Porgy and Bess at The Royal Alexander Theatre. Porgy and Bess was soon followed by South Pacific and Finian’s Rainbow, as well as other classic musicals. The budding choreographer and child star wanted to be a choreographer so she enrolled at the National Ballet School. Molly fell in love with the idea to write songs, and she began to consider herself a potential songwriter. Molly was 15 when she started a disco group, Chocolate Affair. It lasted just over a full year. In 1979, she founded Alta Moda, an art rock band that was funky and Italian for “High Style”, which eventually evolved into the more rocking Infidels. Molly began a side career as a jazz singer while she was trying to progress in rock and roll. Molly was a mother to her children by the late 1990s. After being burned twice twice by record companies, she considered quitting the music industry. But Steven Mackinnon, a Toronto songwriter and producer suggested that she write songs for him. After a dozen songs, the partnership was successful. However, Sony Corp., Molly Johnson’s record label, failed to make it a success shortly after its release. She recorded Another Day (2003) three years later. This made her a true star in France. Molly’s next album, “Messed Around”, was her first album with Universal Music Canada. The result was a stunning and sophisticated pop record, recorded “live” on the floor with her band mates over 14 days. It incorporated Molly’s fine melodic skills, Tin Pan Alley-style lyrics, jazz phrasing, and overall pop sensibility. Molly Johnson Songbook (2011) and Lucky (2008) were her second albums. Molly was awarded the 2009 Juno Award for Best Vocal Jazz album for her fourth career-defining album Lucky. She also won the 2009 National Jazz Award for Best Female Vocalist. Molly has performed all over Canada, the United States and France, alongside many renowned artists such as Blue Rodeo and Tom Jones, Anne Murray and Stephane Grappelli. Molly has performed on stage for many of the most famous icons in the world, including the late Princess of Wales and the Prince of Wales aboard the Royal Yacht Britannia. She also performed for Nelson Mandela and Quincy Jones, the legendary producer and trumpeter. Molly is the sister to Tabitha Johnson and Clark Johnson. Molly is a dedicated supporter of communities in need. She founded the Kumbaya Foundation and Festival, which raised awareness and funds in 1992 for HIV/AIDS. Molly continues to work with many charitable organizations every year. Molly was awarded the Queen’s Jubilee Medal and, in 2008, she was made an Officer of The Order Of Canada. This distinction, which is rare, was awarded to Molly in recognition of her philanthropic efforts for many causes and her international contributions to arts. Molly was the voice for the Canadian Broadcasting Corporation Radio 2 Weekend Morning show, where she welcomed listeners to their weekend with great Canadian songs and stories about musicians from Canada. The Canadian music icon is also hitting up the studios to record her sixth album, which is set to release spring 2014. from http://mollyjohnson.com