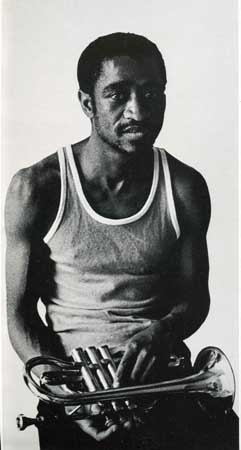 Mongezi Feza started playing the trumpet at an early age. He was playing in bands and taking part in jazz competitions. Chris McGregor saw him and invited him to join Blue Notes. He fled the country with them in 1964. He played first at Antibes Jazz Festival, then in Zurich and London, then in Copenhagen. Feza was part of McGregor’s ensembles and played in Dudu Pukwana’s groups Assagai, Spear and other early ’70s bands. Flute Music (Caroline 1975): He plays flute and percussion in four original compositions including “Sondela”. He was also heard on Keith Tippett’s Centipede (Septober Energy RCA 1971); with avant rock’s Robert Wyatt (“Ruth Is Stranger Than Richard”, Virgin 1975) and in Henry Cow (Desperate Straights, In Praise of Learning), Virgin 1974. Johnny Dyani invited Feza in 1972 to join his trio Xaba with Turkish percussionist Okay Temiz. Feza recorded one his final sessions (Diamond Express Freedom 1977) with Dudu Pukwana. In 1975, he died from a combination nervous disorder and untreated pneumonia. His friends and colleagues thought that his complaints weren’t being taken seriously enough at the London Hospital. Feza loved Clifford Brown’s and Booker Little’s lyrical style. Feza’s free improvisations are a wonder of invention, with kwela rhythms and African melodies influencing them. His premature death has left the European jazz scene without one of its most innovative voices. He was a man loved by both audiences and colleagues. Allmusic