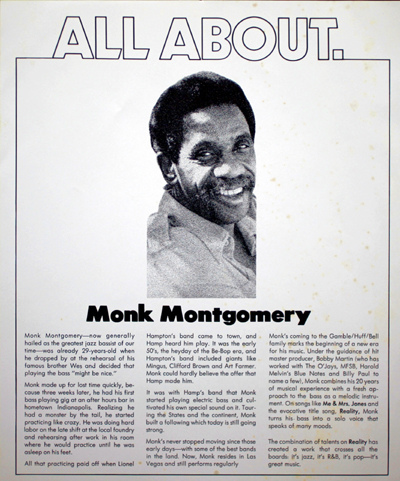 William Howard “Monk”, also known as Montgomery, was an American jazz musician. He lived from October 10, 1921 to May 20, 1982. Montgomery was born in Indianapolis, Indiana. Buddy Montgomery, his younger brother, played vibraphone, piano and guitar. They released many albums together, the Montgomery Brothers. Perhaps the most important electric bassist in jazz history, Montgomery introduced the Fender Precision Bass to jazz in 1951. Montgomery was also a double bass player. Montgomery’s professional career didn’t begin until his 30th birthday, when he was joined by his younger brother Wes. He worked as a musician in Lionel Hampton’s Orchestra from 1951 to 1953. He worked in the Montgomery Johnson Quintet with his brothers and Alonzo Johnson. He moved to Seattle in 1955 to start the Mastersounds, which he formed between 1957 and 1960. From 1966-1970, he worked as a freelancer with Cal Tjader. He continued playing in Las Vegas with The Red Norvo Trio. He was also active in the Las Vegas Jazz Society, which his last years were. He also planned a world-class jazz festival. Montgomery was diagnosed with cancer and died in Las Vegas, May 20, 1982. His wife Amelia was his only child. He also had three sons and four stepchildren. from http://en.wikipedia.org