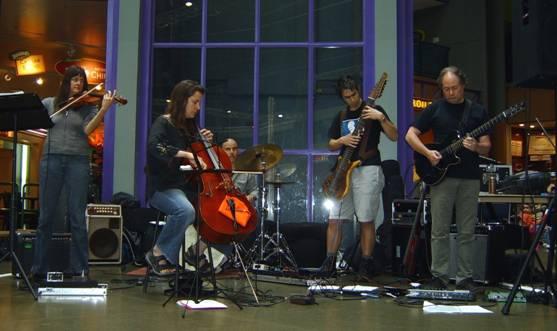 Moraine, a Seattle-based instrumental band, is led by Dennis Rea. It also features Alicia DeJoie and James DeJoie on woodwinds, as well as Kevin Millard and Stephen Cavit on drums. Moraine is a rock band that has gained a worldwide reputation for being one of the most original and electrifying instrumental rock bands. Its many writers and a full complement of talented instrumentalists have made Moraine a hit. Moraine is loved by a wide range of audiences, from progressive rock fans to jazz aficionados, to metalheads, to guitarists, and has performed alongside prominent artists such as Steve Hackett and Three Friends (Gentle Giant), Richard Pinhas, and Eddie Jobson. The 2009 manifest deNsity album by the band, MoonJune Records in NYC, received more than 100 rave reviews. It was also a highlight at NEARfest 2010, which is the most prestigious showcase for progressive rock music. Moraine caused a stir on its spring 2011 tour through major East Coast cities. In September 2011, the band released Metamorphic Rock: Live At NEARfest, its second CD. It was co-produced by Steve Fisk, a legendary producer from the Pacific Northwest. from http://www.moraineband.com