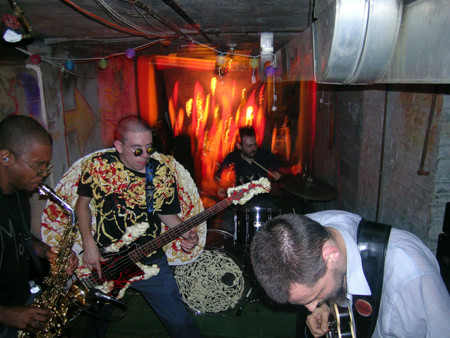 Mothguts was formed on Halloween night 2005. Mothguts is a band that creates music in the “free-grind” style. It is a mixture of jazz, noise, hardcore, and metal with a lot of improvisation. It would be influenced by artists such as Painkiller and Last Exit, Anal Cunt and Dillinger Escape Plan. Pantera, Black Sabbath and Naked City are just a few of the many. Anthony Braxton and Arnold Schoenberg are also some of its influences. Mothguts self-released 3 CD’s, 2 of original material and 1 Christmas record. They have also released a split 12″ vinyl on Kitchen Dweller Records (U.K.). In addition, they are currently working on 2 more albums with Herb Robertson, avant-garde trumpeter legend. They have toured extensively on the east coast, and they continue to do so. They have been known to make every CD and tshirt by hand, and play whole sets of Sabbath covers. Last.fm