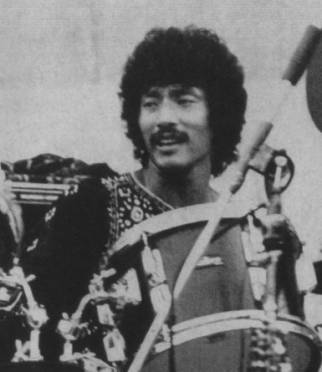 b. 3 January 1946, Tokyo, Japan, d. 13 May 1999. ‘Toko’ Hino’s father was a musician and dancer, and Motohiko became a tap dancer before taking up the drums when he was 10 (his brother Terumasa Hino is a notable trumpeter). Hino turned professional when he was 17 and from 1972 won, yearly, the Swing Journal polls as Japan’s top drummer. Hino moved to New York in 1978, and during a short stay played in JoAnne Brackeen’s trio. He subsequently worked with artists such as Joe Henderson, Jean-Luc Ponty, Sonny Rollins, and Hugh Masekela, while also recording several sessions as a leader. Sailing Stone and It’s There, recorded in 1991 and 1993 respectively, saw Hino mixing originals with versions of songs by the Rolling Stones and Led Zeppelin. Hino, who died of cancer in 1999, had a sharp, dynamic drumming style which reflected the playing of his two favourites, Tony Williams and Elvin Jones. from allmusic