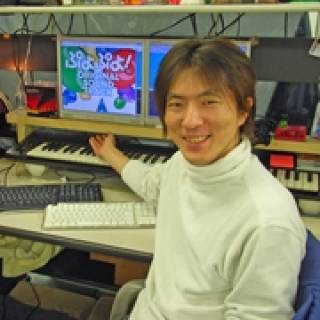 Motoi Sakuraba (Ying Tong Sakuraba Motoi was born August 5, 1965 in Japan) is a Japanese music composer and arranger. Sakuraba started to take music composition seriously while attending Meiji University. He eventually formed “Clashed Ice”, a progressive rock band consisting of him on keyboards, and Genta Kudo on drums, vocals, and guitars. After graduating the next year, Shingo Ueno noticed the pair and signed them with Made in Japan Records. After adding Tetsuya Nagatsuma as bassist, the band was renamed “Deja Vu”. The band’s only studio album, Baroque in the Future (which was entirely composed by Sakuraba) would be released in 1988. The band broke up in 1989. However, Sakuraba would release Gikyokuonsou in 1991, a solo album with a similar sound. Sakuraba joined Masaaki Shiono and Yasunori Shiono in late 1989 to work as a Wolf Team composer. Sakuraba’s early professional friendships have led to a high demand for his composing abilities and arranging skills. Masaaki Uno, a former Wolf Team director and composer, started work at Camelot Software Planning in 1994 as a sound director and coordinator, creating games for Sega, Nintendo, and Sony. Sakuraba was a Camelot game composer, including the entire Mario Golf, Mario Tennis and Golden Sun series. Namco’s landmark game Tales of Phantasia was developed by Wolf Team in 1995. These and other Tales games featured Shinji Tamura, a fellow Wolf Team composer, as composers. In 1995, Jun Asanuma (former Wolf Team producer) and Yoshiharu Gotanda (Tales of Phantasia writer, programmer) founded tri-Ace, with financial backing by Enix. Their keystone productions have been the Star Ocean and Valkyrie Profile. With a few exceptions, Sakuraba was the composer of almost all their games. Hiroya Hatsushiba (a long-time Sakuraba sound designer) and programmer founded tri-Crescendo in 1999. She was a former member both of Wolf Team, and tri-Ace. Tri-Crescendo started game development in 2001, while initially contributing sound work to tri­Ace games. Monolith Soft and tri-Crescendo began work on Baten Kaitos. Eternal Wings was their first project. Namco provided financial support. Hatsushiba was the main programmer and director of the project. Sakuraba provided his composing services again. This was extended to the sequel, Baten Kaitos Origins and Eternal Sonata. In 2003, the remnants of Wolf Team became Namco Telenet’s joint subsidiary Namco Tales Studio. Sakuraba was chosen to be one of a number of video game composers in 2007 to arrange the music for Super Smash Bros. Brawl. He chose to arrange “Menu Theme”, the title’s predecessor, Super Smash Bros. Melee. He also arranged the famous “Menu Theme” from Kirby Super Star and the “Jungle Level Ver.2”, from Donkey Kong Country. “Mario Tennis / Mario Golf”, from Mario Tennis and Mario Golf. “Victory Road”, from Pokemon Ruby, Sapphire. “Battlefield Theme”, Final Destination, and “Battle Scene / Final Boss(Golden Sun)” in Golden Sun: The Lost Age. Sakuraba continues to compose music for franchises he worked with in recent years, such as Star Ocean: The Last Hope and Golden Sun: Dark Dawn. He also wrote music for Mario Tennis Open and Mario Golf: World Tour. Other well-known games include Dark Souls, Kid Icarus: Uprising and Phantasy Star Nova. He was chosen to arrange the music for Brawl’s sequel, Super Smash Bros. on Nintendo 3DS and Wii U in 2014. Sakuraba composed the “Theme From Area 6/ Missile Slipstream” for this title. This was a Star Fox 64 and Star Fox Command song. (Team Flare),” from Pokemon X, Y and “The valedictory elegy,” from Baten Kaitos Originals. Sakuraba continues to make solo albums such as “Forest of glass”, and “What’s Up?” Sakuraba has also continued to create solo albums such as “Forest of glass”, “What’s up?” and “Passage”, and he has also contributed his arrangements and performances for many doujin-styled arrange albums. Sakuraba performed a concert live in Tokyo, Japan, during July 2003. He performed progressive rock interpretations of his music, including from Star Ocean, Till the End of Time and Star Ocean, The Second Story, Star Ocean, Blue Sphere, and Valkyrie Profile. Atsushi Hashigawa, a member of Gerard, was his bassist and Toshihiko Nagamura was his drummer. This concert was also released on CD and DVD. While they were practicing for the concert Hasegawa, Nakamura and Nakamura recorded new material for Star Ocean: Till The End of Time. They performed another concert the following year. Although the venue was smaller, it featured music from Baten Kaitos as well as a few new pieces that were not related to games. However, this concert was not recorded and released. In 2006, however, a new concert was held to celebrate tri-Ace’s Valkyrie Profile: Silmeria title. This concert was released on CD. Sakuraba and his band joined the Earthbound Papas at Club Citta, Kawasaki, Kanagawa on September 17-18 2011 to perform at Fantasy Rock Fest 2011. Both bands performed new pieces of progressive rock and videogame music at the event. Sakuraba’s first six tracks were sold as preview CDs for his solo album After all …,, which Strange Days Records released on October 19, 2011. Sakuraba performed at the Tales of Festival in the Yokohama Arena on June 6, 2015. This was his first performance of Tales music at a live event. In February 2017, a selection of Sakuraba’s music from the Dark Souls and Tales series were performed live at Paris’ Salle Pleyel concert hall. Sakuraba made a special appearance at the event, “Orchestral Memories”. Sakuraba expands on the melodic and baroque Japanese progressive rock of 1980s with his trademark complex rhythms, emotional flutes, use of male chorus, and heavy reverb. His lighter side is a cross between cinematic orchestra, symphonic rock and new age. Sakuraba is known for his jazz-like improvisations. He has been working hard to expand his music style in recent years. He is now an accomplished symphonist, and a versatile arranger.