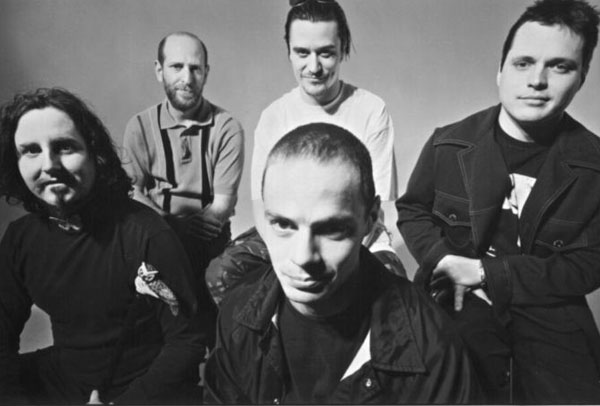 His sound and approach are a unique blend of the abstract, experimental, and absurd. It all started in 1985 in Eureka, California. The group (bassist Trevor Dunn, drummer Danny Heifetz, alto saxophonist Theo Lengyel, tenor saxophonist/clarinetist Clinton McKinnon, vocalist Mike Patton, and guitarist Trey Spruance) met while in high school and took their moniker from an extremely corny children’s educational film regarding bad habits (it was featured in a Pee Wee Herman HBO special back in the early ’80s). The Raging Wrath of the Easter Bunny was the group’s first demo. Soon, others followed such as Bowl of Chiley and Goddammit, I Love America! Their sound became more diverse with each album, and musical boundaries started to blur (metal, jazz, experimental, jazz ska, techno). Mike Patton was hired as the lead singer for Faith No More in 1988. It was actually a demo by Mr. Bungle that earned Patton the job. Instead of dissolving Mr. Bungle, Patton decided it would be a good idea to keep both bands together. FNM’s success (1989’s The Real Thing) led to Mr. Bungle being signed to Warner Bros. in 1991. The self-titled album was released under a variety of aliases. The band gained a loyal following through their subsequent tour. They performed in masks to conceal their identities and covered unlikely songs (Billy Squier’s “The Stroke,” “The Star Wars Theme”, John Sebastian’s “Welcome Back” etc. Patton left Faith No More in 1992 after the tour was over. The rest of the group concentrated on other projects, including Spuance — Faxed head; Heifetz — Dieselhed; and Spruance and Dunn all in Secret Chiefs 3. Spruance joined Patton briefly in FNM for 1995’s King for a Day. The band took four years to complete its debut album, Disco Volante (1995). The group grew its fan base over the course of a long, extensive tour around the world. In 1997, Mr. Bungle quickly returned to the studio to record an album featuring their diverse cover songs. However, it was put on hold when Patton started a tour with Faith No More. The other members then turned their attention to their other projects. In 1999, the group regrouped for the release California. Patton would continue to work on his many projects, but not pay much attention to Mr. Bungle throughout 2001. The Fantomas’ 2001 album The Director’s Cut felt more like a mix of Disco Volante, California than the thrashing and cut up theatrics of Fantomas’ debut. This left many to wonder what the future holds for Bungle. It should be noted, however, that Patton’s only certainty is uncertainty. All music