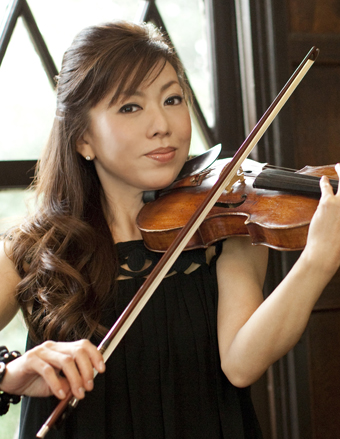 She has been playing violin since she was four years old. Made her professional debut in 1986. She was well-known for her participation in the 1995 album of pianist Kenny Barron in New York. This led to her first album, “Thinking Of You”, in 1998. She continued to release her second album, “Pure Moment”, in the next year. In Readers’ Choice Awards Misc, she was named the best musician. Instruments in Swing Journal’s annual poll, and still ranks in the top four consecutive years. As the soloist (guest performer) at the New Year Concert, Kansai Philharmonic Orchestra, she begins her 2000 year. She releases albums one after the other, beginning with her maxi song “Rhapsody In Blue”, her 3rd album “Princess T” which Lee Ritenour produced, and her 1st live recording album “Live”. She was also awarded the Swing Journal New Star Award 2000 at the Jazz Disc Awards 2000. This gave her the opportunity to enter a new field, as a music director for NHK drama. In 2000, she won the prize for excellence at the Media Arts Festival hosted at Agency for Cultural Affairs. She continues her challenge as she releases “All For You”, her fifth album, with Richard Galliano as her guest performer. This was followed by her concert tour “Naoko Terai All For You Tour 2001 – 2002” in eight cities across the country. In 2002, she performs again with Richard Galliano at the commemorative concert of his ‘Django-d’or’ Awards in Le Mans (France). She also performs in the opening act of ‘TOKYO JAZZ 02′. This leads to her joining the SUPER UNIT’ collaboration with Wayne Shorter and Michael Brecker. She was the first Japanese artist who participated in the unit. from http://www.tokyo-jazz.com