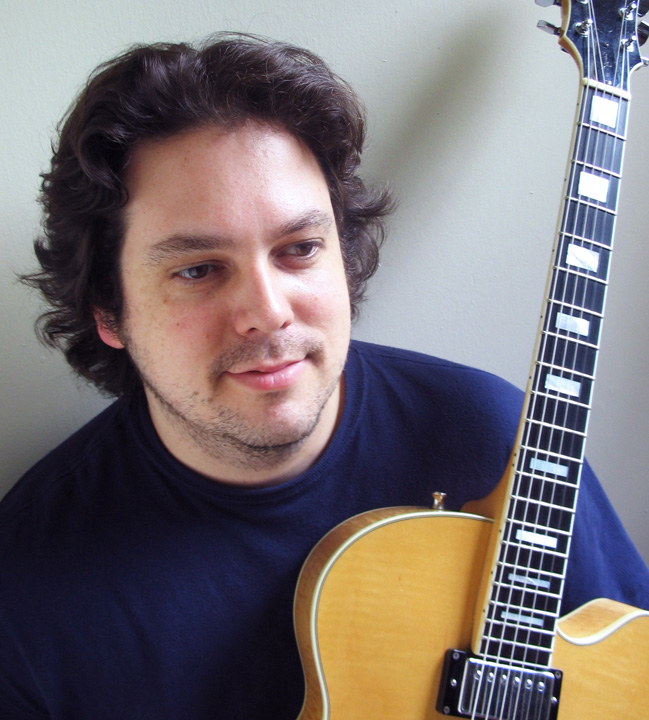 Guitarist, composer and teacher Nat Janoff, has been working steadily in the contemporary jazz scene for the past 15 years. Nat’s earliest experience with music started with the piano. Then, he switched to bass. After hearing Eddie Van Halen, Nat had to play guitar. Growing up in the 80’s, Nat’s musical interests were all things rock and metal and Nat earned a reputation for being one of the best shred guitarist in the area. Nat’s transition from metal and rock guitar to jazz occurred when he sought out a platform to improvise for longer than the standard rock riff. That, and hearing Mahavishnu Orchestra’s Birds of Fire for the first time. Pursue jazz he did and after earning his Bachelor of Music degree in Jazz Performance from William Paterson University in 1996, Nat set to work forging his own musical path. The first marker on that path was Nat’s debut album, Looking Through featuring the rhythm section of world renowned electric bassist, Matthew Garrison and drummer Gene Lake, putting Nat on the map as both a player and a composer. Two more albums soon followed—a live acoustic recording with fellow William Paterson alumnus Jake Schwartz simply titled, Live and a collaborative project with Rave Tesar (of Annie Haslam’s Renaissance on keys and left-hand bass) and Ray LeVier entitled, Berkana. 2010 has been a busy year for Janoff with regards to recording. He was honored with the opportunity to contribute to ESC Records latest tribute album, Mahavishnu Redefined II, recording the track, Are You the One? with bassist Ray Riendeau and drummer Martin Diamond. Janoff also played guitar on three tracks on Ray Riendau’s latest cd, Atmospheres. Most recently, Janoff went into the studio to record his latest cd, Come Together Move Apart with the great talents of pianist John Escreet, bassist François Moutin and drummer Chris Carroll. This album was officially released on September 28th 2010. In addition to playing with his own groups, Nat Janoff has performed with the R&B singer, Joe, R&B legend David “Pic” Conley from the group Surface, legendary pianist, Norman Simmons and drummer Victor Jones’ group, Culturversy. Nat can also be heard on Atlantic Records’ recording artist Debelah Morgan’s CD, Dance With Me and on R&B artist Roland Clark’s new track, The Simple Things. Nat teaches private guitar lessons and has been a guest instructor at the annual William Paterson University summer jazz camp. from www.natjanoff.com