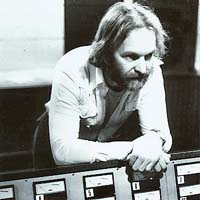 Neil Ardley was born on July 7, 1937 in Wallington in Surrey, England. He attended Wallington County Grammar School, and Bristol University where he earned a degree as a chemist in 1959. At the age 13 he began to be interested in music and soon took up the piano. Later he also learned the saxophone and played both in the university’s jazz bands. After graduating from university, he moved to London, where he joined the John Williams Big Band as a pianist, and wrote his first arrangements and compositions. He was then invited to be the director of The New Jazz Orchestra in 1964. This orchestra, which included many of the most talented young jazz musicians in London, was just starting to form. The NJO was where he learned to arrange and compose. This association lasted until 1973, when the NJO stopped recording. He made many lasting friendships with musicians here, including Jon Hiseman and Ian Carr. They all played on the recordings Neil made later under his own name. Neil was also pursuing a publishing career. He joined the World Book Encyclopedia’s editorial staff in 1962. This American publisher was based in London and produced an international edition. He learned the art of writing for young people from A to Z over the four years the project took. He spent a time at Hamlyn, a pioneering publisher of low-price information books. In 1968, he decided to become a freelance editor to be able to spend more time on music. In the 1970s editing evolved into writing and he became an author for information books mainly on music, science, technology and natural history. In his publishing career, Neil Ardley went from being an editor to becoming an author. He also became an arranger and composer. Ian Carr introduced him in the late 1960s to Denis Preston. Preston had a large number of musicians and composers – many of them jazz performers – whom he commissioned and recorded. Neil wrote his first full-length pieces with Denis’ support. He combined classical composition techniques with their emotional return of creating themes and harmonic structures with the spontaneity and spirit of jazz. His music is melodic and richly orchestrated. Denis provided a wide variety of instruments including strings, woodwinds, and harp to expand the traditional jazz lineup. This vein was explored further by Neil, who added electronics to the synthesizers he had developed in the 1970s. His 1980 all-electronic album was released. Neil’s recording contract was terminated abruptly and it became clear that music was not a viable option. As computers became more mainstream in publishing, book design was advancing at an astonishing rate. Neil was at the forefront of this revolution when he started writing principally for Dorling Kindersley, a British publisher. As a result, there was no time or energy for music. A whole series of DK books developed, including the award-winning and best-selling The Way Things Work. This book, which Neil co-authored with David Macaulay, was sold more than 3 million copies around the world. Neil had sold approximately 10 million copies of 101 books by the time he retired from DK in 2000. Although there was some new music in this time, Zyklus, an electronic jazz group that combined improvisation and electronic composition methods, did not produce any new music until 2000. He then began to compose choral music, having gained useful experience by singing in local choirs during the late 1990s, and was fully engaged in vocal music until his death in 2004. from http://www.neilardley.com