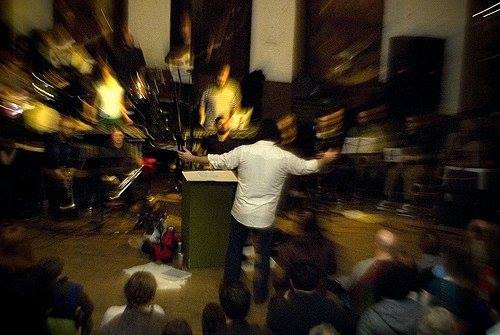 Tobin Summerfield, a Chicago-based composer/improviser, created Never Enough Hope. Summerfield’s most notable work was with Chicago’s Crush Kill Destroy and Detroit’s Larval (Cuneiform Records). Summerfield is an active participant in the Chicago free music scene, playing alongside people like Frank Rosaly and Aram Shelton, Keefe Jack, Fred Lonberg–Holm, Keefe, Keefe, Keefe, and others. His aesthetic employs the entire spectrum of the diverse groups he contributes to, moving from the collective voice of rock, post-rock and punk; New York No Wave minimalist/maximalist extremes; joyful big band theatricality; highly orchestrated new music soundscapes; and powerful, dense, freewheeling improvised music to lush, thick polytonal/polyrhythmic textures. Never Enough Hope is Summerfield’s synthesis: the emotional immediacy and balance of great, composed music. Summerfield wanted to combine all of these experiences in Never Enough Hope’s Contraphonic debut. The Gift Economy is the result. Never Enough Hope is a mix of rock and free-music idioms. The orchestration takes the form of a 20-piece ensemble with scores of vibraphones and violins. It mixes with guitar, bass and trumpets. Summerfield works with every member of the ensemble, including the improviser, composer, and player. Summerfield is a mentor, hero and teacher to the musicians of Never Enough Hope. The Gift Economy is a collection of songs and stories that were inspired by the experiences of its members. Never Enough Hope is a reunion of family members and an all-star team. From www.contraphonic.com