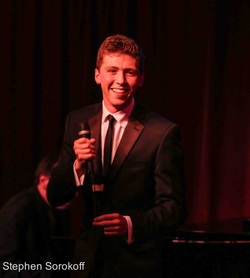 The 2012 Great American Songbook High School Vocal Academy and Competition winner was a dynamic new voice in American classics. The youth ambassador of the Great American Songbook was the 18-year-old upstate New York native. The New York Times gave Nick a high-five when he performed at Feinstein’s at Loews Regency in New York. He was accompanied by Michael Feinstein and Marilyn Maye, and praised his “easy swinging confidence and charm” that suggested he could become another Michael Buble. LA Weekly called him “a budding talent”, and the Carmel Current called him “absolutely stunning” and the Napa Valley Register “stunning”. Other performances included the Pasadena Pops with Marvin Hamlisch and Davies Symphony Hall in San Francisco. The Nugget, Reno, the Cincinnati Pops and Riverbend Music Center and the Napa Valley Opera House. Nick performed alongside Barry Manilow and Clay Aiken at the inaugural gala for The Great American Songbook Hall of Fame. The Syracuse Symphony Orchestra and CNY Jazz Orchestra are some of his recent performances. He was influenced by Fred Astaire, Frank Sinatra and Louis Armstrong. He began singing and performing in the choir and vocal ensemble at an early age. He also worked in theatre and dance. Nick performed with jazz legends Hilary Kole (Eric Comstock), Laurel Masse, and other performers at the York Theater For Hidden Treasures: The Song of Larry Kerchner, to benefit The Michael Feinstein Great American Songbook Initiative, and The Mabel Mercer Foundation. He was invited to sing the National Anthem at the Indianapolis Colts’ September 2012 game. In addition, he will be opening for Feinstein at Feinstein’s Loews Regency during Feinstein’s “Gershwin Holiday” show that runs November 27 through December 22. He was selected as a finalist for the Noel Coward Cabaret Awards in New York City in June 2013. Ziobro’s debut album – produced by Michael Feinstein and featuring jazz greats Bucky Pizzarelli, Tedd Firth, Jay Leonhart and more – was released in May 2014. from http://www.nick-ziobro.com