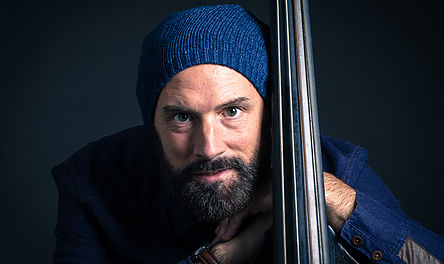 The parisian jazz scene has had a rare musician for more than a decade: Nico Moreaux, a bass player, composer, and band leader. He has been a prolific bass player, earning the respect of many, including Olivier Boge and Tony Paeleman (the who’s who of French contemporary jazz), as well as Tigran Hamasyan. Moreaux has a strong attachment and sense of aesthetics and artistry that makes any band feel at home. His music is a mixture of warmth, humor, and a love of strong melodies. This can be heard in the wild-heard and highly acclaimed “Fall Somewhere”. And regardless of whether Moreaux is performing live or writing, Moreaux seems driven by the same overarching quest: To deliver what is true and essential. (P.M)
Nicolas Moreaux is a descendant from H.Berlioz, a 19th-century french composer. He has had private lessons with masters Ben Street, Johannes Weidenmueller and Dennis Irwin. They all teach clarity, space use, and creativity through the bass.

Three records have been released by him as a band leader (a two-drums sextet), as well as three as a coleader (FOX, Belleville Project), on several prestigious labels (Freshsound Sunnyside Jazz&People). His compositions were described as melodic, poetic, and energetic by critics. However, they also demonstrate his generous ability to use a wide range of colors in his writing. His last album, “Fall Somewhere”, was influenced by a variety of styles, including folk/rock, classical, film scores, and free music. He won the prestigious Grammy du disque Charles Cros award for jazz record of 2013.

FOX, a band that was formed in collaboration with Pierre Perchaud and Jorge Rossy, was nominated for the “Revelation” award at the 2016 French TV/Radio “Victoires de la musique” awards.