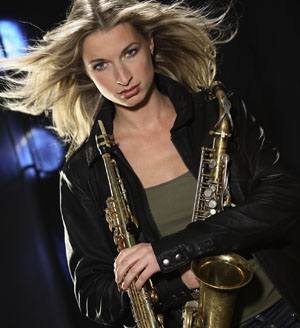 Nicole Johanntgen was born in Fischbach (D) on September 4, 1981. She began playing classical piano at six years old and moved on to the saxophone at age seven. Nicole had her first stage experiences with her father’s band and the “Jugend Jazz Orchester”, based in Saarland. She founded the quartet, “NICOLEJO” with her brother Stefan Johanntgen, Christian Konrad (bass), and Elmar Federkeil (“drums”) in 1998. Four CDs were self-produced by them. Their fifth CD, titled “Go On”, was released on March 25, 2009 by Jazzhaus Records in Freiburg/Germany. Lew Soloff said that Nicole is an extremely energetic and vibrant player with a pure artistic integrity. Music is everything to her, and that translates to me as well as many others.” Lew Soloff: The saxophonist was a member of:,.International Association for Schools of Jazz”(IASJ, USA),.,Sisters in Jazz” [IAJE], USA], Rembrandt Frerichs Quartet (“NL”), Malcolm Braff’s African Roots Ensemble” (Ira Coleman, b – Sting), Minino Gray (perc -Dee Bridgewater), Julio Barreto (dr), Julio Barreto (dr), Julio Barreto (dr), Julio Barreto (dr), Julius (dr), Julio Barreto, a (dr), etc. Respect feat. Nils Landgren at Jazzfestival St. Ingbert. NICOLE JO is Bill Evans’ Support-Act. She was a guest solist at Halle’s renowned “Women in Jazz” festival in 2010. She performed with Malcolm Braff (p), and Minino Garray (perc) in July as a special act at the Cosmo Jazz festival on the Mont Blanc, France. Nicole Johanntgen, a masterclass and workshop for young musicians, gave a masterclass at Washington University in Saint Louis (USA), October 2010. Two concerts in Saint Louis were a success. Nicole Johanntgen has been an endorser for Rico Reeds in Switzerland since February 2011. Bill Evans, a saxophonist, says that she is capable of playing many styles of music. She is very current. Nicole Johanntgen was awarded the?award of radio station Saarlandischer Rundfunk, Sparkassen financial group Saar”, the award for young musicians, the first award in the?,European Yamaha Sax Contest, Berlin” and the first award in the?,Concours de jeunes soliste de Jazz in Fribourg CH”. She participated in the David Liebman workshop, Pennsylvania. David Liebmann said about Nicole that she has something special in her playing: A big, generous heart. She plays as if her life is on the line and draws everyone within her reach into her music. An exceptional energy!” from http://www.ricoreeds.com