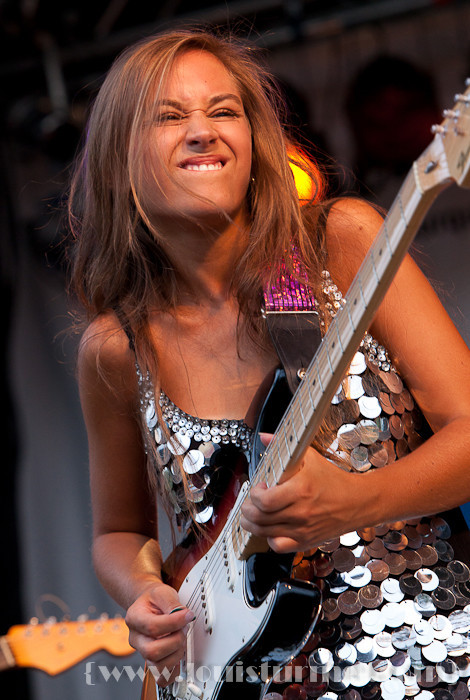 Nina Attal has performed more than 500 shows and is only 24 years old. This makes her a unique performer. At 16 years old, the blues prodigy was considered one of the best in the field of blues laments. She has since become a ferocious funkster. Her second album Wha was recorded in New York by Philippe Devin, Jerry Barnes (a noted bass player for Chic and an important sideman on the US Black music scene) and features a powerful blend of B.B. King, Stevie Wonder and Chaka Khan all inflections in an elegant setting of tasteful Rhodes sounds and stylish guitar licks. Nina Attal’s voice sounds almost like a blues singer from Memphis or the Mississippi Delta. This impression is not true. Her natural strength and dynamic voice has nothing to do w/ weight or age. The enigmatic singer will not hesitate to call her musicians to their aid if they fall asleep while singing on stage. At just 17, the no-holds barred prodigy won five prizes in the Blues sur Seine Festival talent search. A few months later, she recorded Urgency, her first EP. The same year, she was invited to perform at Montreal Jazz Festival. She was 19 years old when, in the wake her self-produced debut album Yellow 6/17, she won the hearts of French audiences when she made an appearance on Nagui’s Taratata television program. The seasoned performer, whose bluesy style was becoming more funky and soulful, was immediately successful. Her ability to get people dancing was made possible by her hardworking and strong performances with a full orchestra. She was carried by her inexorable musical formula and began touring Europe as the head of a dynamite group. They opened for Jamie Cullum (Robben Ford), Avishai Cohen, Charlie Winston, Charlie Winston, and even French pop star Zaz, who insisted that she take her along on her tour to Germany. Nina’s career was transformed by a chance meeting with Jerry Barnes at Sete Festival 2013. After the success of “Get Lucky”, Nina was touring with Chic and when Nile Rodgers’s brilliant bassist (Barnes, who has performed with every Black musician from Diana Ross to Stevie Wonder), noticed her. Nina, a more sexy than ever, visited Jerry in his dressing area and showed him demos of her new album. Barnes called Nina a few weeks later to invite her to New York to collaborate on potential hits songs with Philippe Devin, her producer and cohort. Barnes was inspired by the two songs, “Ain’t Gone” (Baby), that were written during the sessions and convinced to coproduce the album alongside his best friends: Bashiri Johnson (Michael Jackson) and drummer Steve Jordan (Eric Clapton). Jerry also plays the bass. Nina was stunned by the offer, but her producer suggested that she return to New York to record at the Avatar Studio. This studio was once home to Stevie Wonder, Paul McCartney and Chaka Khan. Nina recorded her first album “real”, Wha, in this studio. It was a tribute to Greenwich Village’s famous cafe, where Bruce Springsteen and Kool were recorded.