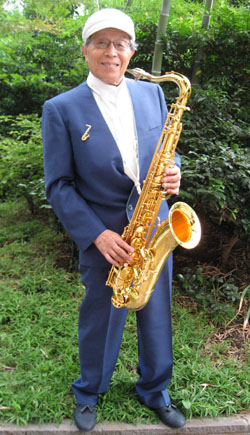 Nobuo Hara (80) is the leader and founder of Nobuohara and His Sharps and Flats. This 17-member band was formed in 1951 and helped make jazz popular in Japan. Their swinging rhythms took the country by storm and they still keep their audiences captivated with their live performances. Hara took his band to the Newport Jazz Festival every other day since 1967. He also has played with many stars, including Quincy Jones, Count Basie, Sammy Davis Jr., Henry Mancini and Silvie Vartan. This allowed Hara to create his own galaxy that would shine brightest and sound the best. His playing partners have included Quincy Jones, Count Basie, Miles Davis, Sammy Davis Jr., Perry Como, Henry Mancini, Silvie Vartan, Nat King Cole, Yves Montand, Sarah Vaughan, Diana Ross, the list goes on and on… from http://www.japantimes.co.jp