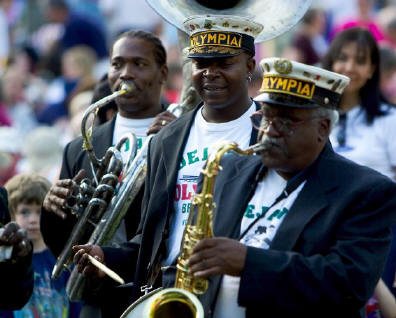 New Orleans jazz brass band, the Olympia Brass Band, is called The Olympia Brass Band. From the end of 19th century until around World War I, the first “Olympia Brass Band”, was in existence. Freddie Keppard was the most well-known member. Harold Dejan, the saxophonist and leader of the Eureka Brass Band’s 2nd unit, was killed in 1958. The Olympia formed to revive the historical name. They played a prominent role in the 1973 James Bond movie, “Live and Let Die”, where they led a funeral march for an assassinated victim. Alvin Alcorn, a Trumpeter, plays the knife-wielding “baby-face killer”. The band played for parties and parades, but they also had a Sunday gig at Preservation Hall for many years. The band toured Europe many times and also visited Africa for the U.S. State Department. While they were in London, the band broadcast a BBC radio broadcast to Queen Elizabeth for her 25th wedding anniversary. They also performed for Pope John Paul II in New Orleans. Text contributed by users is available under Creative Commons By–SA License. It may also be available under GNU FDL.