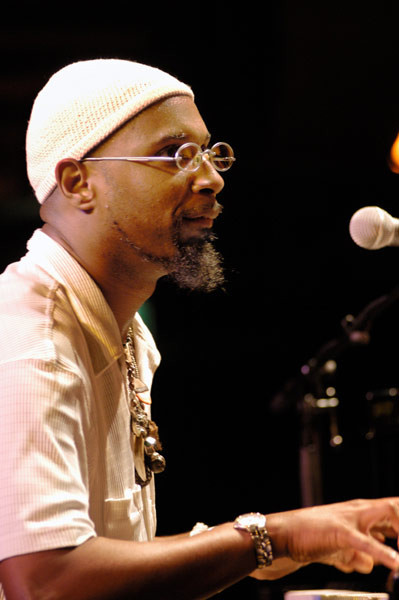 Omar Sosa is a versatile jazz artist. He can be arranged, produced, played percussion, and even lead a band. His unique blend of electronic and world music, as well as his Afro-Cuban roots, creates a new urban sound that is both original and fresh. All this while keeping a Latin jazz heart. His charismatic presence on stage makes Mr. Sosa a standout performer, inspiring fellow musicians with his energetic playing and improvisational approach. This approach is full of emotion and humor. His charismatic presence on stage always inspires his audience to get up and join him in singing chorus vocals. This increases spontaneity and connects the two of them. Mr. Sosa’s latest CD on Ota Records, Mulatos , features Latin jazz master Paquito D’Rivera on clarinet. This recording is a delightful, adventurous, well-wrought and wholly enjoyable mix of Cuban jazz and Latin dance grooves, French chansons, North African trance music and European folk. It dances to the rhythms of Indian tabla, jazz drums and studio mixing. The oud and the soft voice of the Arabic Lute are also featured. And the composer on marimba. The NYC-based Jazz Journalists Association nominated “Mulatos” for Latin Jazz Album of the year. His music is unique in Afro-Cuban jazz. While it has roots in the African Diaspora folkloric traditions, Mr. Sosa is open to new ideas and is not afraid to challenge established norms. Sosa’s music is a joyous mix of Afro-Caribbean and jazz rhythms. He uses electronic effects and percussive forays at the piano, as well as a variety of electronic effects. His passionate, inspired playing at the keyboard makes it a delightful mixture of Afro-Caribbean and jazz. His moods and tempos can change easily. Sosa loves Latin jazz’s clave grooves, and adds experimental touches to keep his listeners interested. Since 1997, Omar Sosa’s 15 recordings have been released on Ota Records in Oakland. This includes 2002’s GRAMMY-nominated “Sentir” album. Recently, he performed with his Octet at Carnegie Hall’s opening of the new Zankel Hall. Alex Ross from The New Yorker noted that Sosa “has a ferocious flair to rhythm and a keen artistic wit”. John Adams, composer, was the one who opened Carnegie Hall’s new venue. He said that Sosa is an extraordinarily creative musician with an exceptional harmonic sense. His piano playing is unique: Although it has obvious roots in Cuban music and he’s taken his technique to the keyboard to completely new places, Don Heckman, Los Angeles Times writer recently said that “Sosa’s vision of contemporary Jazz reaches across all imaginable boundaries”. Visit www.melodia.com for more information. Omar Sosa, Ibrahim Ferrer, Caetano Velloso and Os Tribalistas were all nominated for the 2003 BBC Radio 3 Award for World Music. His debut work for symphony orchestra, From Our Mother, was performed at the Paramount Theatre, Oakland by the Oakland East Bay Symphony, under Michael Morgan. This 45-minute piece in three movements, which combines folkloric elements of Cuba, Venezuela, Ecuador, and Ecuador with modern Jazz harmonies, was cocommissioned by the Yerba Buena Center for the Arts, San Francisco, and the Oakland East Bay Symphony. Partially funded by the Rockefeller Foundation. www.omarsosa.com Text contributed by users is available under Creative Commons By–SA License. It may also be available under GNU FDL.