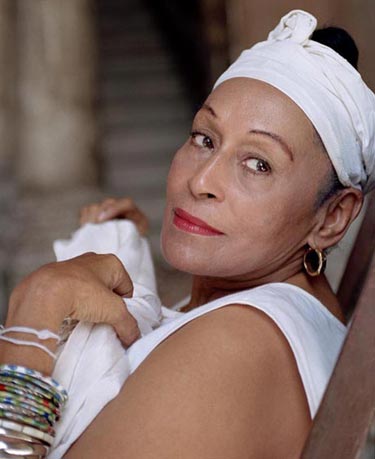 Omara Portuonda, the great old lady of Cuban music, is Omara Portuonda. Her early recordings made her a major in Cuba. However, she was also a prominent figure in The Buena Vista Social Club’s 1996 video documentary and album. Her solo album, The Buena Vista Social Club Presents Omara Portuondo was released in 2000 and reinforced her position as Cuba’s greatest musical ambassadors. Portuondo, a native of Havana was born to a Cuban baseball player and a Spanish-born woman. She left her comfortable family home to marry the man she loves. The soundtrack to her childhood was provided by her parents’ singing. She sang in school choirs as a child and took music classes. Portuondo was heavily influenced by Haydee, her older sister and a Tropicana cabaret dancer. She attended many rehearsals. In 1945, the ensemble was in need of a dancer and Portuondo was hired to fill that void. She began a career in dance and formed a partnership with Rolando Espinosa. Portuondo juggled her singing and dancing with singing gigs with friends Cesar Portillo de La Luz, Jose Antonio Mendez, Frank Emilio Flynn (known as Loquimbambla Swing). This group was instrumental in the development of filin music, which combines bossa nova with American jazz. She also performed for Orquestra Anaconda for a time. Portuondo formed Cuarteto d’Aida in 1952 with Elena Burke and her sister. With the addition of Aida Diestro, pianist and director, and Moraima Secada, the group was able to establish its sound. Portuondo worked with the group even after she released Magia Negra in 1959, her first solo album. Cuarteto da’Aida’s fortunes suffered greatly from the 1961 Bay of Pigs crisis. They had been frequent performers in Miami, FL and were prevented from returning to Cuba after the collapse of the Cuba-US relationship. Portuondo returned home to Cuba, where she continued performing with Cuarteto da’Aida up to 1967. However, her sister opted to stay in the United States. Portuondo was a member of Orquestra Aragon from the 1970s until she settled down to semi-retirement in the mid-’90s. Ry Cooder, who was recording in Cuba with the Chieftains in 1995, heard Portuondo sing and changed her plans to slow down her career. Portuondo was invited by Ry Cooder to be a featured singer with The Buena Vista Social Club when he returned to Cuba the next year. Portuondo and Cucho Valdes recorded Desafios in 1998. Allmusic