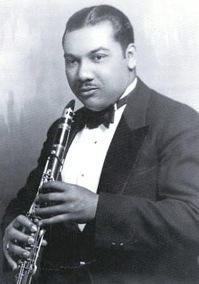 Omer Simeon’s life can be easily divided into three parts because of his significant connections with Earl Hines and Jelly Roll Morton. Simeon was born in New Orleans but he didn’t learn clarinet until his family moved to Chicago in 1914. Simeon took lessons from Lorenzo Tio, Jr., and was soon working as a professional musician. Omer spent four years (1923-1927), playing in his brother’s band as a violinist with Charlie Elgar’s Creole Orchestra. He met Jelly Roll Morton during this period. Morton quickly became Omer’s favorite clarinetist and they recorded many classic sides together in 1926-1928. Simeon was a regular collaborator with King Oliver in 1927 and his successor Luis Russell the year after. He returned to Chicago and joined Erskine Tate’s Vendome Orchestra (1928-1930). In 1931, Simeon joined Earl Hines’ big-band band. There, he played clarinet and tenor and made many recordings with the great pianist. Simeon was a member of the smaller bands of Walter Fuller (1940), Coleman Hawkins (1938) and Horace Henderson (1938). From 1942 to 1947, Simeon was a member the Jimmie Lunceford Orchestra. He stayed with the band through its decline years and continued his participation in the orchestra during Ed Wilcox’s three years as the ghost orchestra’s leader. Simeon recorded Dixieland during 1944-1945 with Kid Ory. Omer Simeon returned to New York and became the clarinetist for Wilbur DeParis’ “New New Orleans Jazz Band.” He toured and recorded with the energetic ensemble until his death in 1958. Omer Simeon was a highly-rated clarinetist over 35 years, and was considered to be one of the most technically proficient New Orleans-born reed player. His only record sessions were two songs in 1929 and 1954.