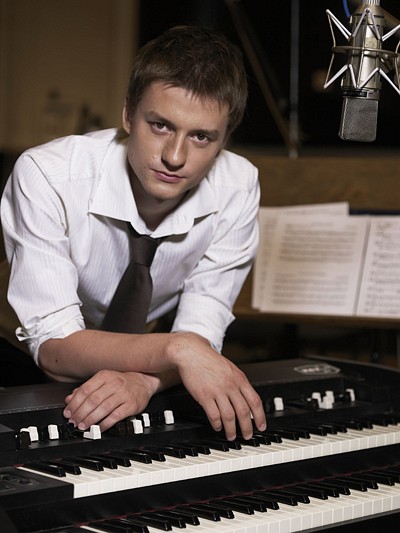 Ondrej Piivec was born 1984 in Brno (south Moravia). He began his musical education at the basic music school, where he studied classical piano. The school he attended for seven years, before he moved to Prague in 1999. A friend suggested that he take part in the Czech Jazz Society’s summer jazz workshop. He was exposed to jazz music through this workshop. Many great Czech and Polish musicians served as his mentors. This musical discovery was so amazing that he attended two more jazz workshops before forming his first jazz quintet. They called it “Mantis”, and performed in Prague and other parts of the Czech Republic. 2002 was the first time they performed in real life. Ondrej was already a member of the jazz trio led by Roman Pokorny, a Czech jazz guitarist. Ondrej had also learned how to play the bass using his left hand, and had switched to the Hammond organ from the piano. He slowly became a professional sideman by working with this trio. After his graduation, he joined Roman’s blues group – Blues Box Heroes. He quickly became a more skilled professional player. Ondrej began performing with Yvonne Sanchez (a Polish-Cuban singer) in their project “Brazilian Groove”. These three bands performed over 130 gigs in 2004. They also performed internationally. Semper Oper, Bluenote – Dresden, a Romanian tour along with Yvonne, a tour through Turkey with a band supporting Billy Cobham’s Culture Mix, FIAP Jean Monnet Paris and Jazz Club St. Germain Paris, Kunstfabrik Schlott and many other engagements. Ondrej also met Alberto Marsico, an Italian organ virtuoso. He was also able to meet Mike Carr, a legendary British organist. These two distinguished players gave him coaching. Ondrej quit Roman Pokorny’s two bands in 2005 and began his own path. His own band, “ORGANIC quartet”, was formed. Most of the members are former students at the Jazz College where he studied since 2004. Ondrej won first place in “soloist” in the talent contest held at the 2005 Philips International Jazz Festival. At the same festival, the ORGANIC quartet was also named “band of the Year”. Ondrej Pivec is still occasionally accompanied by Christian Rover, a renowned German guitarist. Cube-Metier, a Czech-British label, released the ORGANIC quartet’s debut album in 2005. The album, Don’t Get Ideas, was praised by both national and international critics. Pivec was named “Organist-of-the Month” in October 2006 by the international archives of jazz organ. This CD won the Czech Musical Academy Award ‘Andel’ in 2007 for Best Jazz/Blues Album. The band soon released Never Enough and this year’s March saw the release of Overseason. It was recorded in New York last year with Ondrej Piivec, Tomas Hobzek and Jake Langley. from http://www.allaboutjazz.com