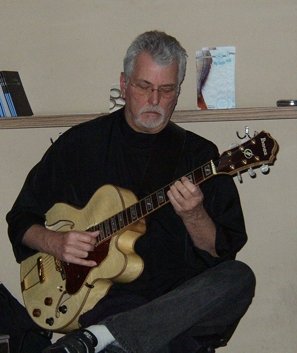 Art Johnson, also known as One Man, is a jazz guitarist, composer, and violinist. He was born in San Diego in 1945. Scott Yannow, a jazz critic, says that Johnson “is one of the most lyrical, modern jazz guitarists”. His unique style of improvisation has been a hit with many people, including Shelly Manne and Lena Horne. Art lived in Los Angeles for twenty years and worked in the studios. He also toured extensively throughout the U.S. and Canada, performing in major concert halls such as Carnagie Hall and The Kennedy Center for performing arts. Art has recorded and performed with Lena Horne (Paul Horn), Lena Horne (Barbra Streisand), Shelly Manne, and Tim Weisberg to name a few. Paul Horn and Tim Weisberg recorded his songs as a composer. He has recorded five guitar CDs, including original jazz and standards. One of his recordings was made by Barney Kessel, a jazz guitarist: “Solo Jazz Guitar”. He returned to his hometown and became a professor at SDSU, where he taught jazz improvisation and guitar for five years. Art started a long-held dream to study the violin. He has created a unique combination of jazz phrasing and classical technique to create his own vision of jazz improvisation. He has two CD’s of violin music, one of which has Mark O’Connor’s endorsement. After a successful tour of South France in 2001 with his own quartet, Art returned to San Diego and performed in a second series of “history of Jazz Guitar” at the San Diego Museum of Art. He also performed with Mark O’Connor during a double-violin jazz concert. Art has been back in France since May 2002, and alternates between Europe and the U.S. From www.artjohnson.com