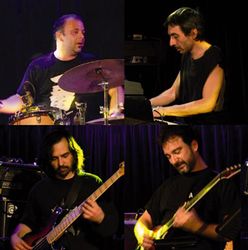 One Shot was first created by Philipppe Bussonnet, bassist (Magma), and Emmanuel Borghi, keyboardist (Magma. Offering. C. Vander trio). It is a combination of Zeuhl and electric Miles (dig that smoky organ and great Fender Rhodes work), with a guitarist who plays in a Patrice Meyer/Scott McGill vein. The band’s first album is a classic mix of jazz-rock and strong influences from the Mahavishnu Orchestra. This record is amazing. Many people have already purchased their first and loved it. 2001 was recorded in the Cave A Musique in Macon (France). It contains lengthy instrumental compositions that are closer to Magma, with a touch more King Crimson. In an interview the band members described their music as ‘rock-jazz-progressive’ with a special accent on the rock sound. The band’s third album, “Ewaz Vader”, was released in 2006. It contained four lengthy compositions that had a hard edge and sometimes approached metal.