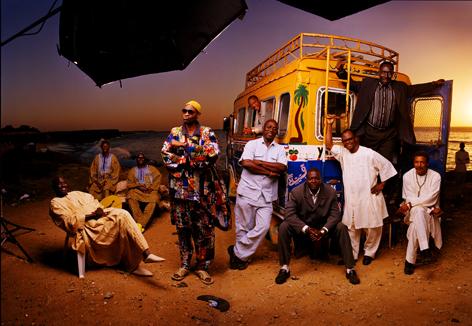 Senegal’s Orchestra Baobab began life as a weekend house band at a Dakar club. It was named after the club, which in turn took its name form the native baobob tree. From humble beginnings, it has gone on to be one of the most influential bands in world music. Their influence has extended beyond West Africa and Europe. Baro N’Diaye was the original leader. The first version consisted of seven members. Three of them were enticed to leave Dakar’s largest band, the Star Band. Ibra Kasse hosted a regular gig for the Star Band. Although they were heavily influenced by Cuban music — Cuban music was a common sound in West Africa since the 1940s and was imported by sailors to be played on radio stations — Orchestra Baobab also added African music. This was largely due to Laye M’Boup (a griot singer who had an extensive collection of Wolof songs). The new sound was so popular that it became a regular entertainment group on weekends. They were also praised for their unique fusion of sounds, which is comparable to Guinea’s Bembeya Jazz. As personnel changes were inevitable, the new members brought their own influences to the band, enriching the sound and feel of the group with Maninke songs and Malinke songs. Thione Seck, a singer who replaced M’Boup after he was killed in a car accident in 1974, was perhaps the most significant addition. However there were rumors that he was jealous of his husband. They played the Baobab Club frequently, but they also entertained at official New Year’s Eve dances, as well as at the Paris wedding of Pierre Cardin’s daughter. The Baobob Club was closed in 1979, but historians believe it was 1977. After that, the band moved to Ngalam, or the Djandeer Club as some historians have suggested. They also traveled to Paris in 1978 to try to make their mark in Europe during this period. On Verra Ca, The 1978 Paris Sessions was their best and most well-produced disc. However, it relied too heavily on their Spanish-language material. The trip was a failure. They lost all their money and returned home. They were Senegal’s most popular band at the start of the 1980s. Their fees averaged $4,500 per show. They recorded frequently (two albums, Mouhamadou Bamba u0026 Sibou Odia were edited into Bamba in 1983). They continued to push their boundaries by adding more African influences, reaching its peak with the 1982 classic Pirates Choice. However, change was coming; another Star Band alumnus, Youssou N’Dour was introducing a new, more energetic sound called mbalax. This captivated Dakar and made Orchestra Baobab, which was more laid back, seem old and out of date. Their attempt to be competitive by changing their sound didn’t succeed. Orchestra Baobab was disbanded by 1987 after the introduction of two female vocalists in 1985. Everything comes full circle and Orchestra Baobab was reformed in 2001 with the European reissued of Pirates Choice (2002 in America). The older and wiser Orchestra Baobab went into the studio to record a new album by Youssou N’Dour, the man who brought them down. In 2007, Made in Dakar, a new recording was released. They continued performing on stages across Europe and Africa. The group worked on new material but they were unable to record due to personnel changes. While the core of the band was still there — vocalists Balla Sidibe, Rudy Gomis and saxophonists Issa Zissokho, and the rock-steady rhythm section consisting of Sidibe on timbales and Charly N’Diaye on bass and Mountaga Koite and Mountaga Koite respectively, there were some important changes. One of these was the death of Ndiouga dieng, the founding vocalist. He was replaced by Alpha in November 2016. Barthelemy Attisso, the guitarist, left music to become a lawyer in Togo. He was replaced by Rene Sowatche. To expand the string section, Ablaye Cissoko, a Kora player joined the group. Wilfried Zinzou, a trombonist, increased the horn section from two to three. The band joined MoussaX’s Dakar studio together with producers Nick Gold and Lamine Faye after Dieng’s death. Cheikh Lo, an old friend, was invited to “Magno Kouto”. Thione Seck, a former bandmate and West African pop star — left Orchestra Baobab in 1978 to perform his first hit “Sey” again, was also invited as a guest. The first single, “Foulo,” was issued in January 2017. In March 2017, the full-length Tribute to Ndiouga Dieng was released. Allmusic