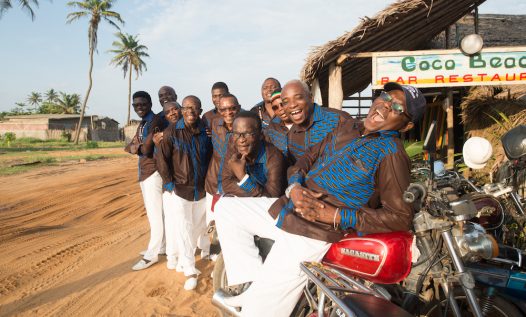 Band from Cotonou, Benin (ex Dahomey), T.P. French for “Tout Puissant”, meaning “All Mighty”. Originally formed in 1968 as Orchestre poly-Disco, it was originally led by Melome Clement (founder and vocals), Bentho Gustafe (bass), Bernard Papillon Zoundegnon on guitar (guitar), and others. In search of a soul singer and to expand, Bentho and Papillon enlisted Vincent Ahehehinnou, a Daho Jazz band that had little chance of success and often played in seedy venues. After signing with Adissa Séidou (owner of the Albarika Store) in 1969, Orchestre Poly-Rythmo de Cotonou was renamed Orchestre El Ritmo due to financial and producer changes. After 12 years of triumphal tours and successful records, Vincent Ahehehinnou left the group in 1978 following disagreements with Adissa Séidou. To secure his hold on Poly-Rythmo, the latter sought to leave Melome Clement behind. Vincent, who had protested the maneuvers, received death threats by Adissa, voodoo rituals in support. The group was not well-known by 1980s but they continued to perform and the band members changed. They have released over 50 albums and more than 300 45s. Their music is rhythmic and persussive, as their name suggests. It is influenced by their anglophone neighbours, Nigeria and Ghana. They use these rhythmic elements and influences to create a variety of styles, which include afrobeat and highlife as well as jazz, soul and rhumba. The tracks can be sung in French or the native Fon language. From discogs