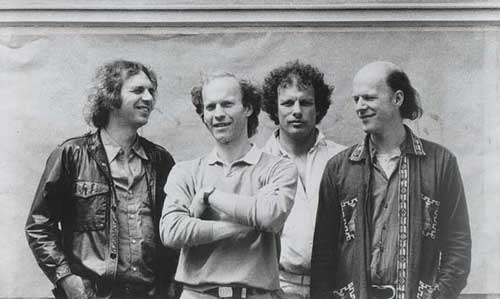 Oregon is an American jazz and music group. It was founded in 1971 by Ralph Towner (guitar), Paul McCandless, Glen Moore (double basse, violin, piano), Collin Walcott, (percussion, sitar and tabla), and Ralph Towner (piano, synthesizer and trumpet). Moore and Towner had been friends since their 1960 meeting as University of Oregon students. Both were musicians in New York by 1969. While working with Tim Hardin, they were introduced to Paul Winter’s “Consort” ensemble. Particularly Collin Walcott, Towner started improvising with them as an informal duo. Moore and Towner had joined the Winter Consort in 1970 and met McCandless. The four of them began exploring improvisation together, and their contributions to redefining the Winter Consort’s “sound” were pivotal in compositions such as Towner’s “Icarus”. In 1970, the four musicians recorded their first group recording. However, Increase Records was closed before it could be issued. It eventually became Our First Record, which Vanguard released in 1980. In 1971, Oregon made its “formal debut” in NYC. Originally called “Thyme Music of Another Present Era”, McCandless suggested that Oregon be renamed. The group’s 1972 first release Music of Another Present Era was released on Vanguard. However, the four musicians also recorded for ECM. The group established itself as one the most influential improvisational groups in its time with the first recordings, Distant Hills, and Winter Light (all Vanguard). The group recorded many albums on Vanguard in the 1970s. They also made three recordings for Elektra/Asylum in 1978 and 1980, including the critically acclaimed Out of the Woods. Also, a live recording was taken from Carnegie Hall performances in Canada in the late 1979. After a few years of hiatus, including the birth Walcott’s child in 1980, the group was reunited and recorded for ECM. The eponymous Oregon was released in 1983, while Crossings was released in 1984. However, Walcott was killed in an auto accident in East Germany during the 1984 tour. Oregon was temporarily disbanded but it regrouped in May 1985 at an NYC memorial concert for Walcott. Trilok Gurtu, an Indian percussionist, was there (Walcott’s choice to be his replacement). Gurtu was invited by Oregon to rejoin the group in 1986. The band toured again and released three albums over his five-year tenure. The group continued as a three-piece, releasing two albums in the period after Gurtu’s departure. Northwest Passage, released in 1997, was a return to percussion. It featured either Mark Walker, drummer, or Arto Tuncboyaciyan, percussionists on all tracks. Walker was later made a full member. The ensemble recorded with the Tchaikovsky Symphony Orchestra Moscow Radio in Moscow in 1999. They premiered orchestral compositions that had been in the works for many years. Their 2000 release Oregon In Moscow received four Grammy nominations. Live at Yoshi’s was recorded in San Francisco in 2002, and it was the first Oregon live recording in over two decades. The group is still active and has a diverse following. From Wikipedia