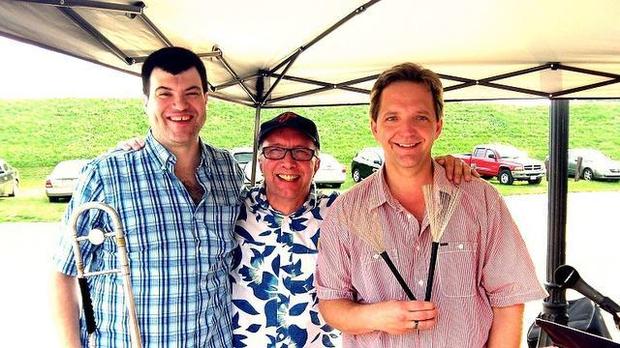 Jay Vonada plays trombone and Steve Adams plays organ. Jim Schade plays drums and the group has performed at many venues in the area and beyond, including the Centre County Grange Fair, Skeeter’s Pit BBQ, and Skeeter’s Pit BBQ. Vonada said that jazz became a passion in his twenties. Vonada played in a college band that featured jazz musicians and took jazz improvisation classes. He said that he started collecting CDs from all the great jazz musicians. His collection now includes 600 CDs. Vonada studied jazz improvisation at Mansfield University for one year, and jazz arranging for one semester. He graduated from Mansfield University in 1993. For four years, he was the featured soloist and trombonist of the Mansfield University Jazz Band. They performed at the PMEA and MENC and were third at the Villanova Jazz Festival 1994. Vonada performed at the Mansfield University Jazz Festival with Bob Mintzer, a jazz saxophonist, and also performed alongside Neil Slater, a Mansfield alumni who was the director of One O’clock Lab Band at University of North Texas. Vonada was awarded a scholarship in 1999 to the Berklee College of Music. Adams was born outside Philadelphia. He began his education on accordion with John Grande, the accordion/piano player of Bill Haley’s Comets. He then moved to the organ, piano and guitar. He received formal training later when he studied counterpoint at Temple University, and classical piano with Dennis Sandole. He also learned improvisation, arrangement, and composition from Sandole. Adams took Dave Liebman’s 2009 master class on Chromaticism In Melody and Harmony at East Stroudsburg University. He is currently studying Alexander technique with Kay Hooper. Adams has performed with Dave Liebman and Jim Pugh as well as Virginia Mayhew (Via Mayhew), Gary Thomas, Gary Robertson, Eddie Severn. Josh Davis, Nelson Hill, Paul Smoker, and Gary Thomas. In the central Susquehanna, Adams performs with many bands, including Jazzin’ and The Hammond Brothers, Bop Top and the Williamsport City Jazz Orchestra. He is also a member of the Clickard Consortium big-big band, Zeropoint large band, Dave Stahl big band, and the little-big band. After 15 years on the Philadelphia jazz scene, Schade moved to the Susquehanna Valley in last year. Jim is a graduate of Shenandoah University’s jazz studies program, Winchester, VA. He has a vast discography and local radio and television appearances. He has taught more than 200 students in his 20-years of private teaching. He is currently the drum instructor for the Mifflinburg High School marching band. from http://www.statecollege.com