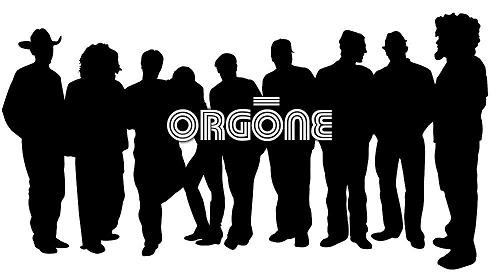 Orgone’s cover of “Funky Nassau”, which was released on Rewind Volume 4, first appeared on Ubiquity. It quickly became a favorite DJ track worldwide. Their reputation in the funk and soul community is built on a strong and growing resume. They have been featured in an Adidas commercial, toured with major-label outfit Little Brother, and played as a backing band for The Pharcyde and Bun B, PharoheMonche, Plantlife (including a BBC performance by Jools Holland), Tone Loc, Eddie Bo, and New Orleans funk legend Eddie Bo at Hurricane Katrina’s benefit. Orgone members also perform at Root Down in LA as Breakestra, Connie Price, and the lions.
The rhythm section is made up of friends who have been playing together for more than 10 years. They have grown artistically together as a group and function as one organic, intuitive whole. While they love the comparisons to Amy Winehouse or Breakestra, they are quick to point out that Orgone’s music is original. “We draw from an a wider musical palette than a lot the ’60’s-inspired music that’s making an resurgence,” says band member Sean O’Shea. Orgone takes the listener on an emotional journey that will take them from Los Angeles to Lagos (horns and percussion), to New Orleans.

Fanny Franklin, the lead singer of the group, joined the recording sessions after hearing her perform with Dakah (a 30-piece hip-hop orchestra). O’Shea says, “We thought she was the best singer in town.” “We asked her for “Funky Nassau”, and that led us to working together frequently.” Franklin’s incredible performances will certainly end her relative obscurity. She delivers awe-inspiring performances on “Who Knows Who,” “Said and Done,” and “Do Your Thing.”

The Orgone apartment/studio where most of the album was recorded is the inspiration for the title of The Killion Floor. It’s also where Plantlife material and the Lions album were made. The Orgone epicenter is the main reason for the title. However, the band’s recent live dates also have influenced the album.

Orgone live is 110% organic in heart and soul. Their live show promises a full-throttle, high-energy, gritty, high-percussion, horn-laden, heavy hitting dance party. They bring something unique to the table, just like the recording. A vibe, an aesthetic, and an attitude that have been formed over half a century of playing together.

Their music is a slick, unfussy slab of R&B that’s greasy and thick with a particular type of smoke. They recall the majesty and power of Sly & the Family Stone. “Who Knows Who”, the opening track, is all bleary horns with broken-heart vocals. “It’s What You Do” however, is a tight, itchy tune. Orgone leads the charge in the riot that’s still going on.