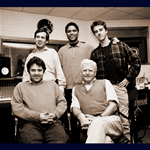 The current jazz scene is very exciting because of the high quality and quantity of classical jazz groups that are made up of young Catalan musicians. However, it’s important to remember that twenty years ago this was a very different situation. It is thanks to the many schools and workshops that teach this type of music that it has been a success. We believe the greatest contribution to jazz is made by those musicians who began their careers in the late 20th century, but didn’t follow any mainstream music or get media support. They chose classical jazz and not to imitate it, but to make their own contribution to jazz’s revival and revitalization. The Four Kats Jazz Quartet is perhaps the most outstanding example of this young generation of Catalan jazzmen. Oriol Bordas, Ignasi Terza, David Mengual, and Jerry Moye (American drummer) were some of the musicians in this group. While some of these musicians are now internationally renowned and highly respected, it was a risky decision to go against the grain during their first years as professional jazzmen. The prevailing fashion of those years suggested that jazz must be merged with other musical styles. Let’s not dwell on the circumstances that led to the Four Kats’ first appearance, but let us instead focus solely on the music. This is where we must acknowledge that the quartet’s contribution was remarkable and set an example for others to follow. The Four Kats have the fundamental qualities of classical jazz. They are warm and expressive in their instrumental language (Don’t blame me Bloi), and they swing hard (Chega de Saudade, Whispering / Glovin’ high, Invitation To Initation). Their soloists’ improvisations feature eloquent, appealing, and consistent dialogues. These are not simply exercises in harmonic experimentation, but tell logical, meaningful stories that often surprise us (Rainy day Bloi). We should add to what we’ve already said that the Four Kats have a unique sound. This is the result of arrangements in which vibraphone and keyboard combine to create a timbre that is distinctive from other groups using similar or identical instruments. (Modern Jazz Quartet, George Shearing Quintet). It is clear that the preparation was intense and meticulous. This group shows professionalism, talent, and creativity. Today, the Four Kats Jazz Quartet is an outstanding example of our young musicians. It’s a focal point for pure jazz enjoyment for all lovers of this timeless music. from www.freshsoundrecords.com/