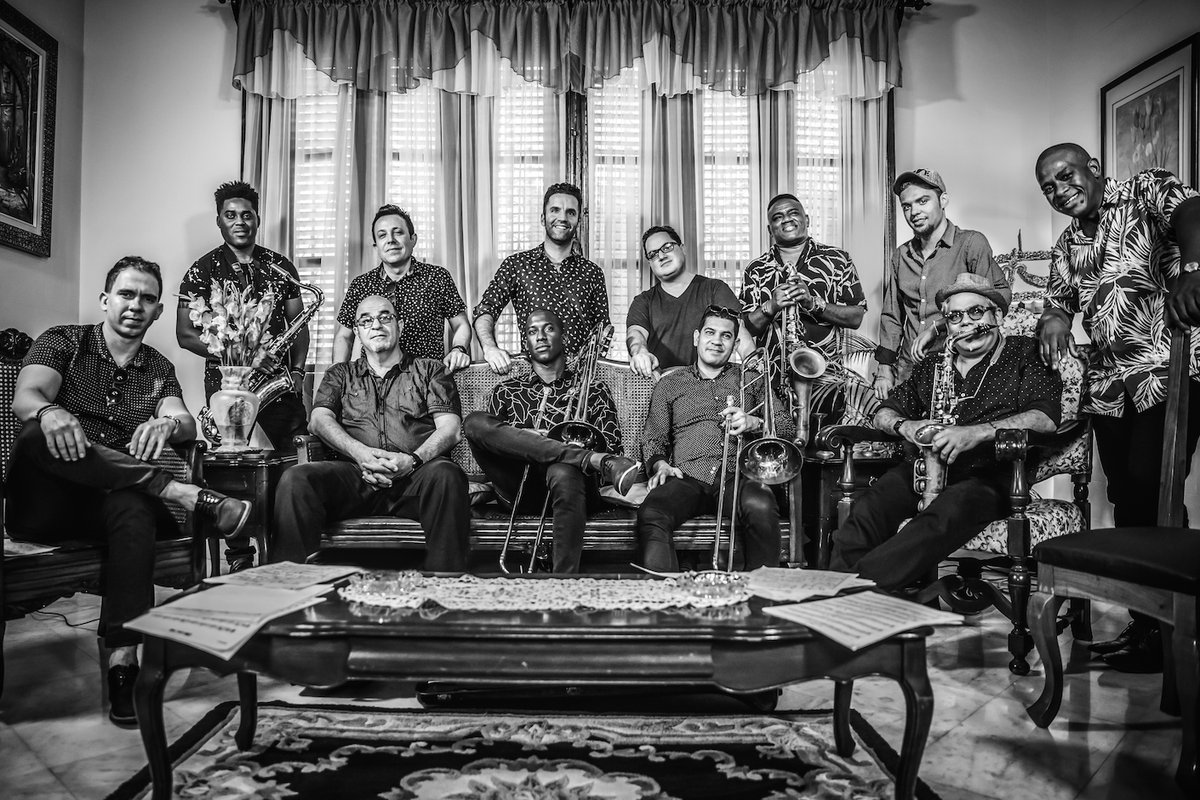 The new Orquesta Akokan LP is so powerful that you can feel the spirit of Cuba’s musical greats emanating from the speakers. It is difficult work to honor and care for these spirits. It’s a collaborative effort of both young and old. The elders are familiar with the rituals and incantations but the younger generation has to learn them. They also have to have the courage to continue the tradition and the heart to create new songs for the spirits. With a stack on charts under his arm, Michael Eckroth went to Centro Habana’s Areito studios in November 2016. He arrived in the wood-paneled, cavernous live room and took inventory of the players assembled from Jacob Plasse. These included a dozen of Cuba’s most talented and pedigreed rhythm and wind players, as well as seasoned young New York Latin music fans and veteran vocalist Jose “Pepito” Gomez. These musicians would make Plasse’s charts a living, breathing document that you can hold in your hands. A sweet arpeggio flies down the keys of your piano. The set explodes with loud trumpet blasts and introduces saxophones who immediately become the heartbeat of a rhythm section. These arrangements have the same beauty, playfulness, and pathos as the legendary dance orchestras from the 1940s and 50s that recorded in the very same room. They evoke the ghosts Arsenio Rodriguez, Perez Prado and Beny More. The time-tested musical architectures son cubano, mambo and other traditional music are still present in all nine original compositions. They all sound great: the melodious tres cubano and the swinging tumbaos of the congas as well as the tight blend vocal harmonies. There’s also something unmistakably new — saxophone sections playing tumbaos of congas, the angelic, swinging flutes you’d expect on a charanga record, sones — vocal arrangements that have the familiar flow and cadence mid-70s “salsa dura” singers. This synthesis of musical grammars and compositional styles of Havana, New York, and old and new makes perfect sense. Akokan, a Yoruba term that means “from the heart” or “soul” in Cuban Yoruba, is why it’s no surprise that an album like this would be returned to Brooklyn’s Daptone Records. The venerable label has been bringing us soulful music for nearly a century, in many styles and with the same craft and flavor as the classic recordings. Daptone has made it possible to enshrine both the artists and genres it honours in the universal canon for dance music. This is the perfect place to prepare this delicious baile between old u0026 new — una soupa levantamuertos (soup for raising the dead), with rhythm and care and, above all, con Akokan. -Martin Perna, Antibalas from www.orquestaakokan.com