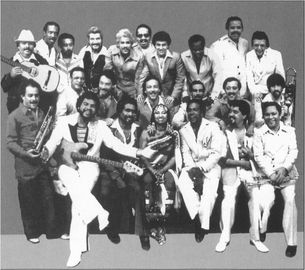 Orquesta Narvaez, originally from Puerto Rico was a band that epitomized the New York City Salsa sound of the 1970’s. Their music was characterized by heavy trombone playing and a strong emphasis on the trombone. This band’s music predated the term “salsa Dura”, which is still used today to describe their music. The band was led by Armando Vasquez as vocalist. Their first and only vinyl album, Reincarnation, was released on the Tico label. “La Mafia”, a song that features Willie Colon’s famous arrangement style, has a sound that resembles Hector LaVoe’s early vocals. The band has their own sound on many of the other tracks, despite sharing musical similarities with Willie Colon and Hector. This rare vinyl gem is worth the effort for collectors of salsa classica. It is not easy to find, and it is quite expensive. According to rumours, the band is currently working on a recording which will be released in spring 2012.