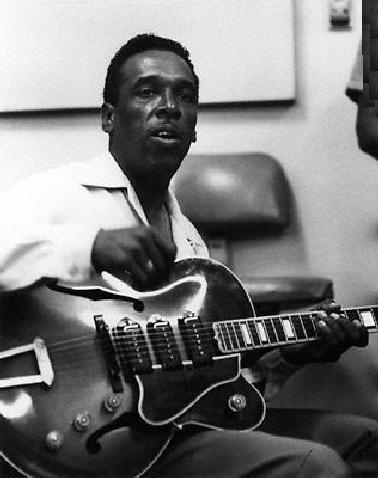 Oscar Moore, born December 25, 1916 and died October 8, 1981 was an American swing-jazz guitarist. Moore was an integral member of the Nat King Cole Trio from 1937-1947 and appeared on almost all of Cole’s records. Moore, a brilliant and influential guitarist was also influenced by Charlie Christian. Barney Kessel once stated that Moore was the true jazz guitarist, even in small groups. He recorded with Art Tatum (1941), Lester Young, and Lionel Hampton. Moore’s postcole career was not very fruitful. From 1947 to mid-50s, Moore was a member of the Three Blazers with his brother Johnny Moore. After that, the group lost popularity due to the departure by Charles Brown (pianist/singer). Moore recorded three records on the Verve and Tampa labels in 1953 and 1954. He was then out of music, with the exception of a Cole tribute album in 1965. He eventually quit music and settled in Los Angeles where he was a bricklayer. From Wikipedia